There is no shortage of memorable things to do and see in Niagara-on-the-Lake. The hard part will be doing it all!

Sip your way along Niagara’s popular winery trail. Test your luck at Casino Niagara. See a play at the famous Shaw Festival Theatre. Take in moving colours at the beautiful Butterfly Conservatory. Step back in time at historic Fort George, and explore the important historical collections housed at the Niagara Historical Society Museum. Have a love of music? Make sure to catch one of the many outdoor or indoor musical concerts offered as part of Music Niagara, an Ontario summer Music Festival featuring jazz, country, classical and choral music. The active traveller can likewise enjoy miles of riverside trails designed for biking, inline skating and scenic hiking.

Staying past sunset? Follow in the footsteps of ghosts on a guided ghost walk. Savour Niagara’s farm-to-table bounty in one of the many award-winning bistros and restaurants. Take a leisurely evening stroll along the shops in the Heritage District. The options are quite simply endless. 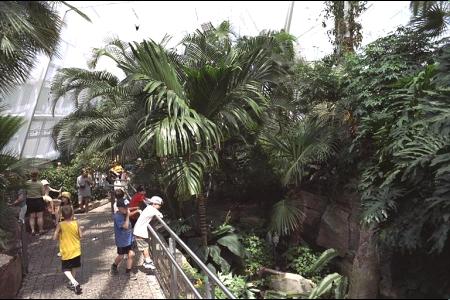 The Niagara-on-the-Lake butterfly conservatory is a magical attraction. Inside the conservatory resembles that of a rain forest with a path that takes you through a tropical environment which includes a waterfall, a pond, lush greenery, exotic blossoms and of course 2000 colourful butterflies which are made up of 45 different species for you to gaze at. Tickets are under $15 for adults and less than $10 for children. The Niagara-on-the-Lake Butterfly Conservatory is located on the Niagara parks botanical gardens.

Fort George is a famous landmark at NOTL which allows visitors to step back into Victorian time as far back as 1796 to experience the military history that is well known in the Niagara region. The fort was the military post for the British Army during the war of 1812 and played an important role in the defense of Upper Canada and against American military attacks. Come and see this national historic site and the reminiscence of the Battle of Fort George and see the sloping glacis, buildings, beautiful landscapes, structures at Niagara on the Lake where soldiers once stood firing muskets, fifers and drummers tuned and black smoke covered the air.

The Niagara-on-the-Lake Ghost Walk takes you through the town and stopping at places such as the Angel Inn, Prince of Wales Hotel, Apothecary and the Royal Fort George Theatre. You will be entertained with scary stories that have been compiled over the time that include seances, murders, war history and other dark tales such as the Angry Soldier of the Angel Inn that may keep you up at night. Niagara on the Lake has been well known for its paranormal activity which you can experience for only $15 per person.

Address: 126 Queen Street, Niagara on the Lake, On, Canada 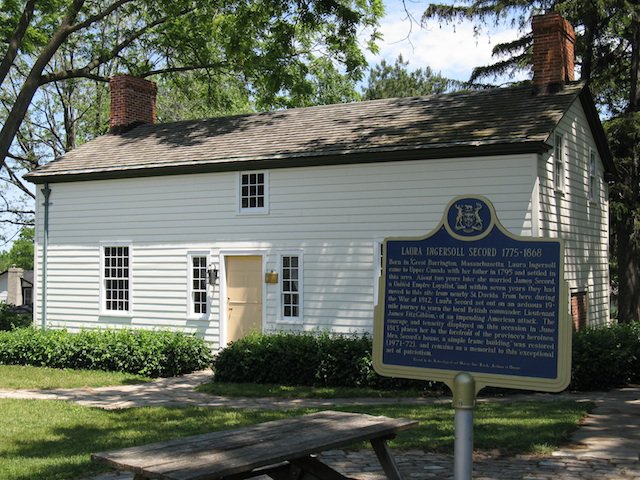 Visit the Laura Secord Homestead which is the home of Canada's most famous heroine. During the war of 1812, Laura Secord set out on a 20 mile journey to warn the Canadian troops of an American invasion. Her journey took 18 hours within enemy lines risking being arrested or worse being shot. She successfully delivered her message. Through the Laura Secord Homestead you can take a step back in time to learn about the enchanted stories of her adventures, information about her and the surroundings as told by costumed guides. Refreshments, ice cream and of course the famous Laura Secord chocolates are made available. Cost of admission is less than $10 for adults and under $7 for children. 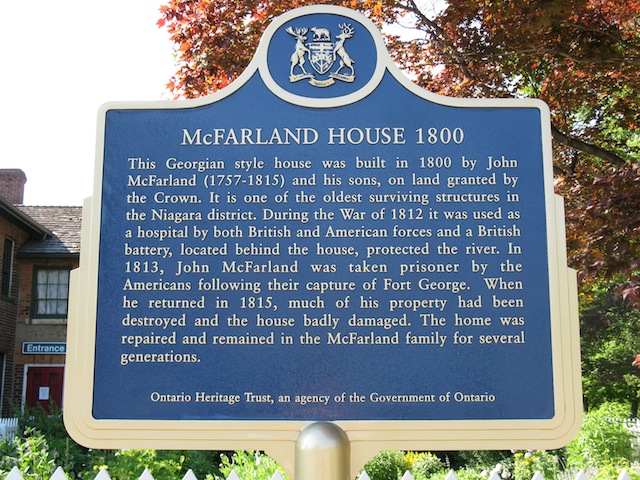 The McFarland house is a famous Georgian house in Niagara-on-the-Lake which was owned by John McFarland and his descendants for over 140 years. During the war of 1812 the McFarland house was used a hospital for both British and American armies. It is particularly famous as it survived the burning of Newark which was a tragedy when American soldiers set fire to the town to drive British soldiers into retaliation in 1813.

The McFarland house is a typical 19th century home with beautiful gardens which are maintained by the Garden Club of Niagara. It was restored by the Niagara Parks Commission in 1959 and furnished in the Empire style to illustrate the period between 1800 and 1830.

Enjoy tea in the McFarland House Conservatory Team Room which opens May 7 until Labour Day weekend with an array of luncheons as well as the famous McFarland Afternoon Tea, homemade scones and desserts.