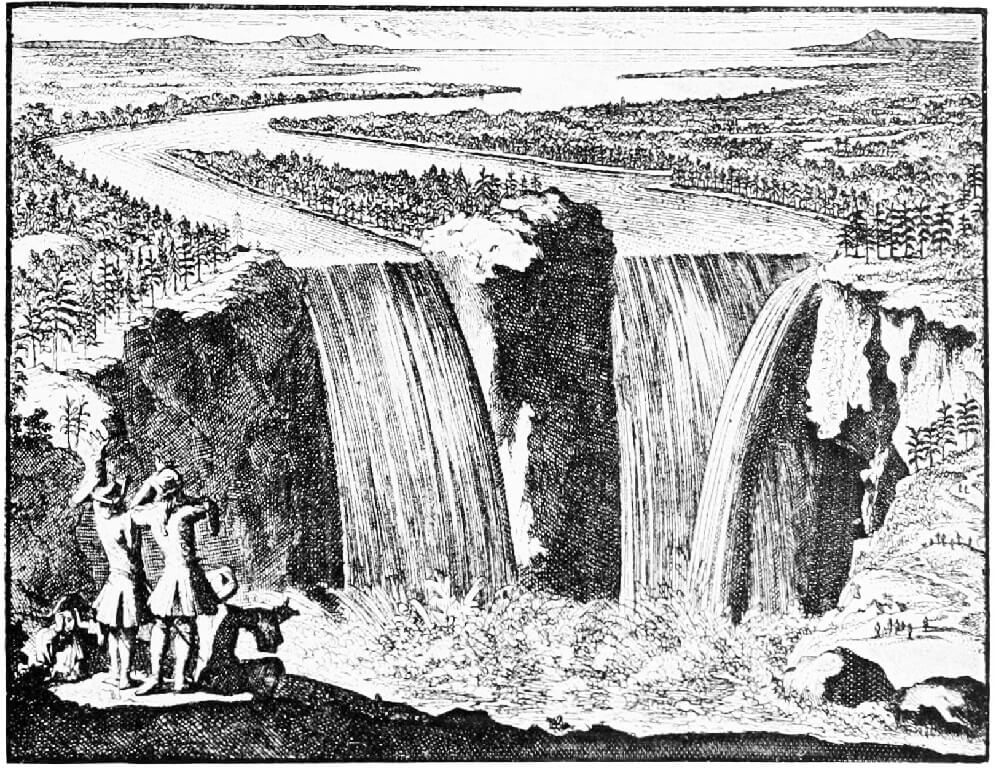 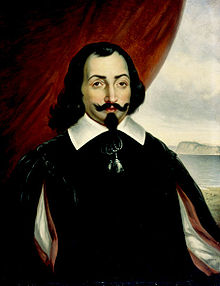 The first written mention of Niagara Falls was made by Jacques Cartier who left France in May of 15 35 on an exploration journey. Reaching the St. Lawrence River he named it after the Saint of the same name. Here he enquired of the Indians about the source of the river and was told “that after ascending many leagues among the rapids and waterfalls he would reach a lake 140 to 150 leagues broad (Ontario), at the extremity of which the waters were wholesome and the winters mild; that a river emptied into it from the south which had its source in the country of the Iroquois; that beyond the lake he would find a cataract (Niagara) and portage, then another lake (Erie) about equal to the former, which they had never explored”.’

Samuel de Champlain, who came later, in 1608, recorded in his book Des Sauvages what the Indians on the St. Lawrence told him about the waterfall, but Champlain never visited it. Later, in 1615, Champlain’s interpreter and agent, Etienne Brule went into the interior of North America and lived among the Indians. He was the first white man to see Lakes Ontario, Erie, Huron and Superior. It is possible that he reached the Niagara River and saw the Falls, but he left no records.

The Franciscan friar, De la Roche Dallion, crossed the Niagara River near what is now Lewiston in 1626. Jesuit Father Gabriel Lalemant in his Relation of 1640-41  a Relation was an annual report sent back to Jesuit headquarters in France refers to the Niagara River as Onguiaahra, the celebrated river of the Neutral Nation. The name Onguiaahra appears on maps as early as 1640. This name and the later, present version, Niagara, probably derived from the attempts of the early Jesuit missionaries to establish a written equivalent for the Iroquoian word. The generally accepted meaning of the name is “The Strait”.’

The first direct mention of the Falls 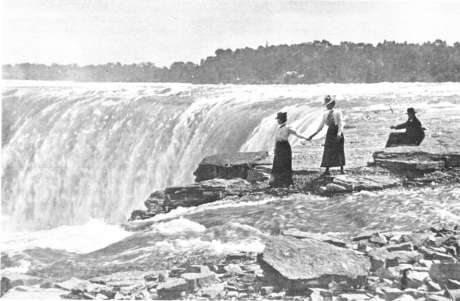 The first direct mention of the Falls of Niagara was made by Le Sieur Gendron, a Doctor of Medicine who lived among the Huron Indians for many years. He wrote about the Falls in 1644 in letters sent back to his friends in France. In 1660 these letters were published in book form, Quelques Particularites du Pays Des Hurons en la Novelle France. In one of the letters Gendron describes the Falls but does not mention having visited them. He wrote: “Almost due south of the Neutral Nation one discovers a great lake about 200 leagues around, called Erie, which is formed by the discharge from la Mer Douce (Lake Huron). At its far end it plunges over a waterfall of terrific height into a third lake called Ontarie, but which we call Lac St. Louis. As the water rushes among the great boulders at the foot of the falls the spray forms a stone, or rather petrified salt, yellowish in colour, which is very effective in the cure of sores, fistules, and malignant ulcers.

“In this direful spot there dwell also certain savages who live off elk, harts, wild cows, and every kind of game, that the rapids carry away and among the rock. They catch them thus without chase – more than enough for their own provision and for that of travellers, with whom they trade these Erian stones (called thus after the lake), who then carry them away and distribute them among the other tribes”.

The Iroquois Federation challenged French occupation in 1648 by invading the territory of the Neutral Indians where the French had their missions and trading posts. A period of unrest and conflict resulted, which disrupted the fur trade and the work of the missionaries. It was not until the Iroquois were subdued by the French in 1667, that the coureurs de bois were able to move along the western trails once more. The missionary explorers followed; the Jesuits, the Sulpicians from Montreal and the Recollets, all undertook a series of explorations. A Sulpician expedition, led by a former cavalry officer, Franqois Dollier de Casson, and Brehand de Gallinee, and accompanied for part of the way by a young La Salle, became the first Europeans known to have entered the Niagara River from Lake Ontario. They were also the first to winter on Lake Erie in 1669-70 and the first to make adequate surveys along the shores of both lakes. Galinee wrote in 1669: “We found a river, one-eighth of a league broad and extremely rapid, forming the outlet of communication from Lake Erie to Lake Ontario…. This outlet is 40 leagues long, and has from 10 to 12 leagues above its embouchure into Lake Ontario, one of the finest cataracts, or falls of water, in the world, for all the Indians of whom I have enquired about it, say, that the river falls at that place from a rock higher than the tallest pines, and that is about 200 feet. In fact we heard it from the place where we were, although from 10 to 12 leagues distant, but the fall gives such momentum to the water, that its velocity prevented our ascending the current by rowing, except with great difficulty. At a quarter of a league from the outlet where we were, it grows narrower, and its channel is confined between two very high steep rocky banks, inducing the belief that the navigation would be very difficult quite up to the cataract. Our desire to reach the little village called Ganastogue Sononotoua O-tin-a-oua prevented our going to view the wonder which I consider as so much greater in proportion as the River St. Lawrence is one of the largest in the world”.’

It was Robert Cavelier. Sieur de la Salle who was to be a party to the “discovery” of Niagara Falls. even though he was not to be the one to see them first. La Salle came to New France in 1666 and became involved in voyages of exploration and fur trading. He established a trading post at Cataraqui. now Kingston, Ontario. In 1678 King Louis XIV of France authorized La Salle to search for an inland route to the Gulf of Mexico, and to establish forts and trading posts along the route of his exploration. 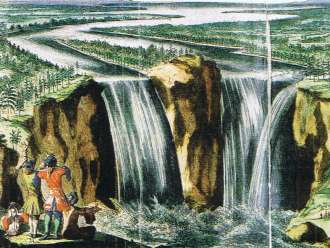 Hand-coloured engraving from a copy of Father Hennepin’s Nouvelle Decouverte, 1697 which belonged originally to William III of England

In 1678 the expedition, led by La Salle’s lieutenant, La Motte, and including Father Louis Hennepin a Recollet priest in the party, set sail from Cataraqui in late November. They arrived at the mouth of the Niagara River on December 6. and on the morning of December 7. proceeded upriver to make a landing on the west bank.’ They were looking for a suitable place on the Upper Niagara River to build a boat which would take them through the Upper Lakes to the source of the Mississippi. They climbed the escarpment and then travelled along the bank of the Niagara Gorge. Later on that same day they came upon the Falls of Niagara. They went on and that same night set up camp at the mouth of what is now the Welland River.

Father Hennepin in his book Nouvelle Decouverte published in Utrecht in 1697 wrote: ” I could not conceive how it could be that four great lakes, the least of which is four hundred leagues in circuit, and which empty into one another, which all come at last massed at this great fall, do not inundate this great part of America. What is more surprising in this is that from the mouth of Lake Erie to this great fall the land appears almost all smooth and level. You can scarcely perceive that one part is higher than another, and this for the space of six leagues. It is only the surface of the water, the current of which is very rapid, that makes it noticeable…, And yet the discharge of so much water, coming from these fresh waterseas, centres at this spot and thus plunges down more than six hundred feet, falling as into an abyss which we could not behold without a shudder. The two great sheets of water, which are on the two sides of the sloping island that is in the middle, fall down without noise and without violence, and glide in this manner without din; but when this great mass of water reaches the bottom, then there is a noise and a roaring greater than thunder.

Moreover the spray of the water is so great that it forms a kind of clouds above this abyss, and these are seen even at the time when the sun is shining brightest at midday,… It is into this gulf, then, that all these waters fall with an impetuosity that can be imagined in so high a fall, so prodigious, for its horrible mass of water. There are formed those thunders, those roarings, those fearful bounds and seethings, with that perpetual cloud rising above the cedars and spruces, that are seen on the projecting island, already mentioned…”

Hennepin’s book included a description of the Falls and an engraving by J. Van Viene. This is the first published picture of Niagara Falls. To Father Louis Hennepin, therefore must go the credit of being the first European to see, describe and depict the Falls of Niagara.

Hennepin’s exaggerated description of the Falls, describing them as 183 m (600 ft.) high, was not disputed until 1750 when Peter Kalm’s account, accompanied by a sketch, appeared in the Gentleman’s Magazine, January 1751. Kalm wrote: “Monsieur Morandrier the king’s engineer in Canada, assured me, and gave it me also under his hand, that 137 feet was precisely the height of it; and all the French Gentlemen who were present with me at the Fall, did agree with him, without the least contradiction: it is true, those who have tried to measure it with a line, find it sometimes 140, sometimes 150 feet, and sometimes more; but the reason is, it cannot that way be measured with any certainty, the water carrying away the line”.’ Although Kalm had nothing to do with the sketch that accompanied the article, it is quite evident that the engraver based his work on Kalm’s description. It is considered to be the first picture after Hennepin to be based on an actual sight of the Falls.’

The British capture of Fort Niagara in 1759-60 ended French domination in the area. Through the writings of the French priests, traders and explorers, Niagara Falls became known to Europeans before Jamestown and Plymouth Rock. The expansion of the British influence brought articulate travellers who wrote descriptive accounts of their visits, which were published and distributed in England, generating more interest in this natural wonder. Depictions of Niagara Falls improved when done by British officers who had been taught drawing and water colour painting by drawing master Paul Sanby,R.A. as part of the course of study at the Royal Military Academy in England.

The invention of lithography which allowed widespread sale in England of lithographic views of the Falls, heightened public awareness of the Cataracts. This sparked an interest in the natural wonder and increased the desire of many to visit the Falls of Niagara.