There are three basic categories of Niagara Falls: American, Canadian or Horseshoe and Bridal Veil. In the middle of the Luna Island and the Prospect Point is where the American Falls is situated; the Horseshoe/Canadian Falls is in the middle of the Table Rock and the Goat Island; and the Bridal Veil is located in the middle of the Goat Island and the Luna Island. The Bridal Veil and American Falls have the same length of brick measuring 1060 feet. They also have equal height which measures 176 feet. They both have a volume of water amounting 150,000 US gallons every second. However, the actual volume of water of these two different falls may vary due to the presence of two hydroelectric plants that draw the water into reservoirs before it gets into the falls. This process largely affects the volume of water that the falls contain.

The amount of water intake by these hydroelectric plants can vary depending on two contributory factors. These include the time of day and the time of year. The water flow reaches its peak during peak season of tourist arrivals like the months of June, July and August. In case of emergency, the flow of water can be reduced by the companies that operate the hydroelectric plants and increase the intake of water. 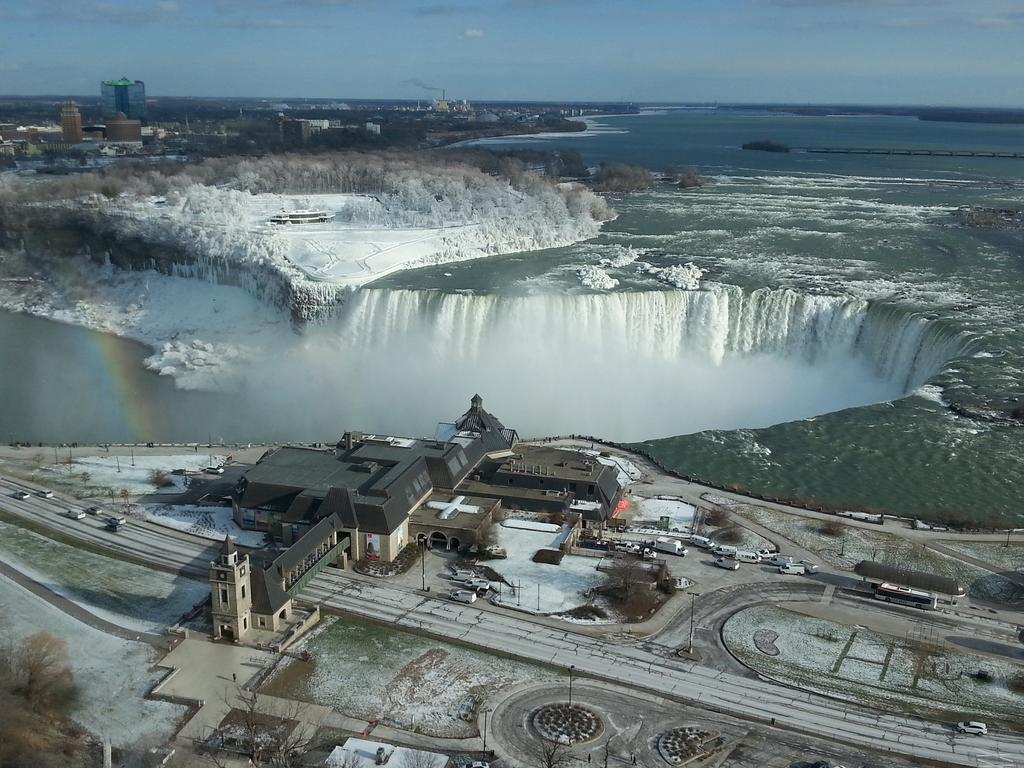 The name of the Bridal Veil Falls is inspired by its physical appearance. This falls is situated adjacent to the American Falls. The American Falls and Bridal Veil Falls are separated from each other by a small parcel of land known as the Luna Island. The Horseshoe or Canadian Falls has a brink that measures 2600 feet long. The height of the falls is 167 feet. The volume of water of this falls amounts 600,000 US gallons every second. Almost one-third of the Horseshoe Falls lies within the territory of the United States of America according to the United States Geological Survey (USGS).

The tremendous water volume does not stop flowing but the flowing water and mist create formations of ice along the banks of the river and falls. The accumulated ice formation can have a thickness of fifty feet. In the event that the extreme coldness of winter lasts so long, the ice can stretch entirely across the river and lead to the formation of so-called “ice bridge”. This formation can stretch down the river for many miles and it can reach an area called lower rapids.

Visitors were permitted to wander on the ice bridge to view the beauty of the Niagara Falls until 1912 after the bridge broke up where three tourists were killed. The tourists can also enjoy watching mini- icebergs that sit in the Niagara River. Niagara Falls facts can be very interesting to learn about. The flow of water over the American Falls was completely stopped for many months in 1969. This idea aimed at finding out if it is possible to remove the huge rocks from the falls’ base to enhance the appearance of the falls. In the end, everybody decided to turn down the plan due to great expenses.

Here are more Niagara Falls facts you should know about. The term “Niagara” comes from the Indian Iroquois term “Onguiaahra” which means “the strait”. There is an existing international boundary that separates Canada and the United States. Since digital cameras were not yet existing, tourists before sketch the Niagara Falls and have them as remembrances. Due to the popularity of the Falls, it was used as the setting of films entitled Superman and Niagara. What the tourists love about Niagara Falls is that it is bathed with spotlights of different colors at night making the falls more romantic, awe- inspiring and colorful.

Here are some simple yet interesting Niagara Falls facts especially for kids to make sure that they take interest in and understand this beautiful natural wonder. Niagara Falls is not just something that adults will enjoy; it is fun for all ages. Kids will be amazed by the power and speed of the water as it cascades over the falls and plummets over 150ft to the river below and will love viewing the old barrels and contraptions that people from the past used to try to go over the falls. If you are planning a trip to Niagara Falls or you are just trying to better educate your kids on this amazing natural wonder, here are a few fun facts about Niagara Falls for kids.

Approximately 28 million people visit this fall ever year making it one of the most visited wonders in the entire world. On the American side of the fall there is the Niagara Falls State Park to visit where you can watch movies about Niagara, view history exhibits, and buy souvenirs and gifts. Below are some more facts for kids which will make sure that they have some fun while they learn about North America’s most beautiful natural wonder. 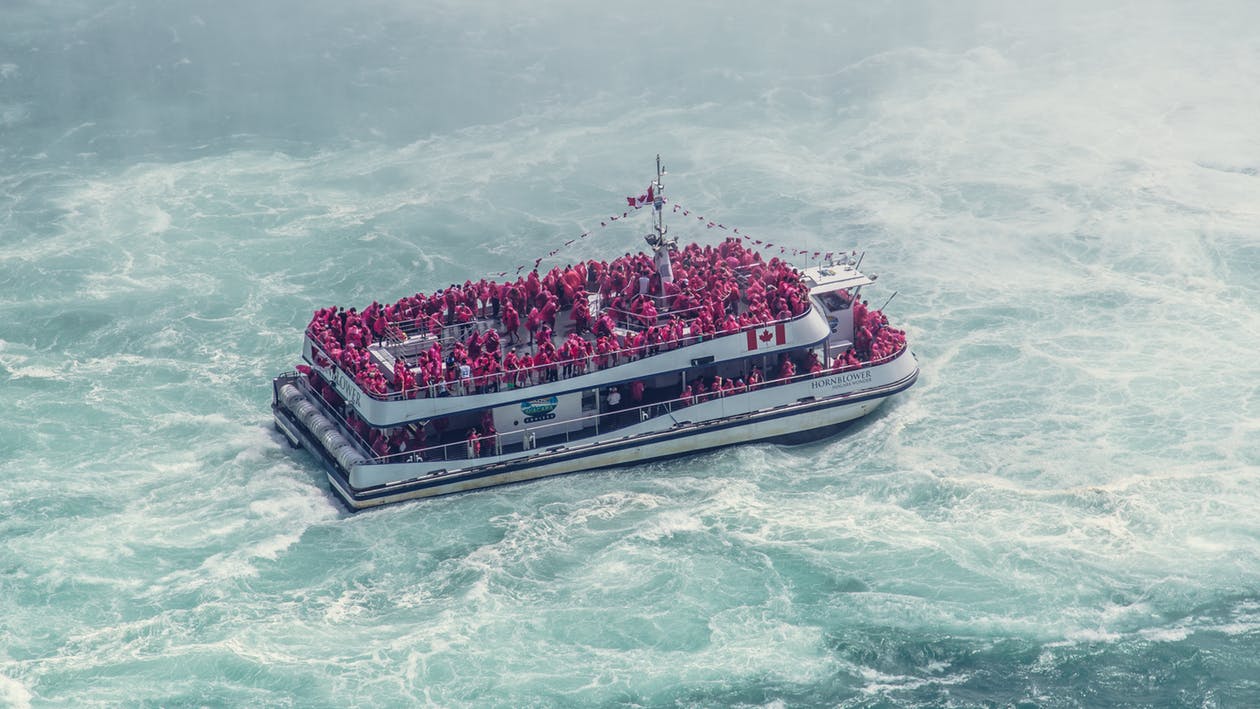 Kids will enjoy some of the amazing tourist attractions in the region, such as, the Maid of the Mist ferry ride, Cave of the Winds tour, Rainbow Bridge, and the Journey Behind the Falls. The Falls are open year round and are illuminated by beautiful lights of all kinds of colors every evening just after sunset and there are also fireworks shows for your family to enjoy every Friday night of the summer. With so many things to do, attractions to see, and places to visit, you can rest assured that children, and adults alike, will never forget your trip to Niagara Falls. 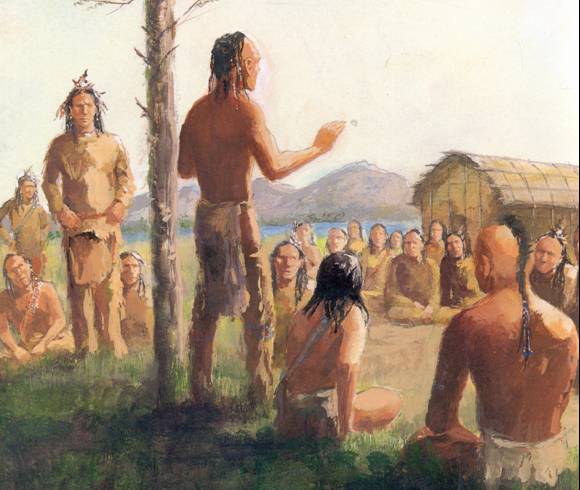 Niagara is an Indian word, which means ‘strait’ or ‘the neck’.  Niagara Falls is the collective name for the network of waterfalls, lakes and rivers that converge in the area between America and Canada. The waterfalls include:

These falls are 180 feet high and over 1000 feet wide.  The name derives from the lovely, veil-like appearance of these waterfalls.

Shaped like a horseshoe, these falls are over 160 feet high and over 2500 feet wide, some of these falls lie in Canadian territory.

Goat Island separates the Bridal Veil Falls and the Horseshoe Falls, and provides a very popular viewing location for tourists.  It is accessible via bridges, which run to the island from the mainland.

The falls are the most powerful in America and are derived from the Niagara River, which drains one of the largest freshwater lake systems in the world.  Situated on the border between Canada and the United States, Niagra Falls runs between Buffalo, New York and Toronto, Ontario.  Niagara Falls was created during the last great ice age, which massive glaciers separated and caused a path to be carved in the region.  The green waters that flow over the falls are caused by dissolved rock salts that dissolve in the water.  The Great Lakes of North America were forged during the same ice age event that created Niagra Falls.

The Niagara Falls and the river systems that feed this amazing area, emerged as a product of the last great ice age, over 12,000 years ago.  After the first system of falls was created, another geological event occurred 10,000 years ago, which changed the location of the falls.

In the 18 century, tourism became very important in relation to this area, as people began to hear about the spectacular beauty of the waterfalls.  Bridges, boating trips and stepped pathways were constructed in response to ongoing demand for access to Niagara Falls.

Niagara Falls are over 2,500 feet wide.  The water is derived from The Great Lakes system.  Over 2 trillion litres of water flow through the falls each hour.  Every year over 22 million people come to the city of Niagra Falls to visit.  The waterfall began flowing over 12,000 years ago.

Niagara Falls presents itself as a great natural challenge to many, and over the years daredevils, stunt artists and climbers have attempted to navigate the falls in various ways.

1901 – Annie Taylor went over the falls in an airtight barrel and survived.

1911 – Bobby Leach went over the edge of the falls in a steel container.  He too survived, although he broke his kneecaps and his jaw during the attempt.

1920 – Charles Stephens died while attempting to go over the falls in a wooden barrel.  His arm was all that was left of him in the barrel, his body never found.

1928 – Jean Lussier went over the falls in a giant rubber ball, and survived.

1930 – George Statakis suffocated when he became trapped behind the falls

1995 – A jet ski goes over the falls, but the parachute does not open.  Rober Overcracker dies as a result.

The Romantic Nature Of Niagara Falls

Niagara Falls has long been considered a romantic destination for newly weds.  Many of the restaurants and hotels in the area have amazing and awe-inspiring views of the beautiful waterfalls, and this creates a wonderful atmosphere and ambiance for couples.  Historically, Niagara has always been an immensely popular location for newly weds.  The trend was believed to have been started by a royal visit to the area, Napoleon’s brother.  The surroundings are mystical and magical, and secluded picnic spots, flowers, trees and lovely candlelit restaurants inundate the area.

Many travel agents offer travel packages to the falls.  In addition to walking trails and bridges, there are boat cruises that can be taken so that you can view the falls from an entirely different perspective.

Niagara Falls is one of the most beautiful areas in the world, and is listed as one of the Seven Wonders of the World.  In addition to being extraordinarily beautiful, the site has a rich and interesting history and many wonderful restaurants, hotels and events to enjoy and experience.

Amazing and the most interesting facts about  Niagara Falls