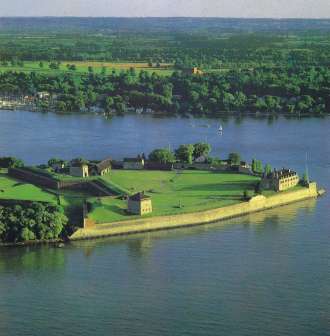 Constructed in 1726 to guard the entrance to the Niagara River and the upper lakes, Fort Niagara is the oldest building in the Great Lakes area. The strategic significance of this location was recognized as early as 1678 when the French explorer LaSalle built Fort Conti here to protect the fur trade. In 1726, the present fort was constructed, but to allay the concerns of the Indians, the French made the fort to resemble a French chateau. However, the thick stone walls with openings for cannons indicate the true military intention of this structure. The French and Indian wars led to Fort Niagara being captured by the Englishin 1759. In 1796, the fort again changed hands as it became part of the new United States of America.

The fort played a key role in the War of 1812, twice serving as the launching point for successful invasions of Canada. Toward the end of the War, Fort Niagara was captured by the British, only to be returned to the USA when hostilities ceased. 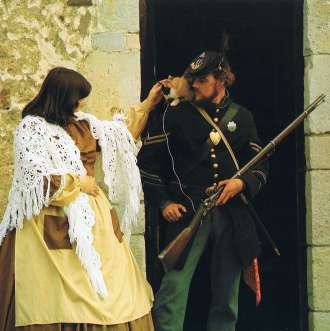 The fort’s original stone buildings have been preserved as they stood before the American Revolution, including massive stone walls and bastions, dozens of cannons, a moat and drawbridge, blockhouses, stockade, and more. Although it is open year round, the best time to visit is from July 1 until Labour Day, when the Old Fort Niagara Guard fire muskets and cannons in exciting drills and reenactments.

The fort is located adjacent to the Fort Niagara State Park, which includes a lighthouse, an 1812 cemetery, and other park amenities.

During the War of the Revolution and after the defeat of the French in 1759, Fort Niagara had been in the hands of the British. To this point flocked many of the refugees of 1776, “Tories” to the Americans, but “United Empire Loyalists” to the Canadians. Sir William Johnson having concluded his treaty with the Senecas in 1764, wherein strips of land four miles deep on each side of the River became the King’s property, a large number of these refugees from the Mohawk Valley and other points east, settled within the sound of the guns of the Fort on the Canadian side of the River. Many descendants sfill occupy grants of land given these loyal dissenters who had made a community of the place as early as 1780. From this paint as base, Walter Butler; his father, John Butler; and the gentleman Mohawk, Joseph Brant, a Mason and brother-in-law of Sir William Johnson., set out to destroy that part of Washington’s breadbasket that lay in New York State. Here spawned the plans that brought the Cherry Valley Massacre and the futile effort at Newton in the valley of the Chemung to stem the tide of Sullivan’s campaign that forever broke the power of the Six Nations and brought thousands of its members to huddle close to the bastions of old Fort Niagara during the cold winter of 1779-1780. Too few indeed are the Americans who know well this part of their history. The guns at Niagara waited for Sullivan but he was too wise to court a contest against such odds in a snow-covered wilderness. The blackened ruins of the Indian villages marked his path  villages that never again heard the war cry or the beat of the red man’s drum. Had Sullivan continued and reduced this sturdy outpost of the British, Yorktown might never have been in the history books.

Not only Indians sought the protection of this melancholy fortress during the War of the Revolution, but hundreds of persecuted Loyalists stumbled out of the forests at last to view with relief its gray mails. They came from Pennsylvania, from Massachusetts, from New Jersey, from Virginia, Rhode Island, and Connecticut, once again to live under the Union Jack and the protection of British arms. Here, too, came the Indian allies of the British with their American prisoners of war, many of them women and children. many of the latter fatherless. Often did the compassionate wives of British officers bargain with the redmen for their captives. Fort Niagara was the great melting pot of the Frontier and the British outpost most distant from the main theater of the war. Before the war Sir William’s edicts issued from here had ruled half a continent.

Inside the Fort Walter Butler; John Butler, his father; Joseph Brant; and the proud aristocrat, Sir Guy Johnson, sat before the comforting hearth to scheme the campaigns of the Rangers and Mohawks that were so greatly to trouble the harassed Washington and bring about his decision to order the capture of the fortress by the great General Sullivan. The old citadel had been a tomb for the plans of French empire, and soon it would change hands again. In 1796, the fort again changed hands as it became part of the new United States of America.