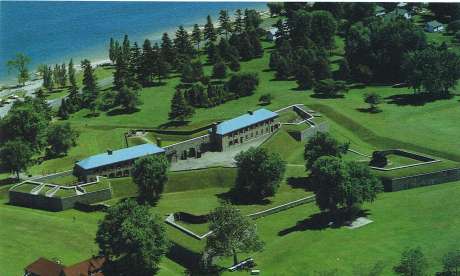 Early in North American history, convenient water travel, excellent fishing and fertile soils attracted Indian tribes to the Fort Erie area. However it was the abundance of flint in the rocky ledges of the local Lake Erie shoreline that kept the native people here on a continuing basis. From this stone they fashioned their tools and weapons. In two local discoveries in 1964 and 1965, archeologists unearthed Indian artifacts and skeletons showing that occupation of this area dates back to an Early Woodland culture around 1000 B.C.

It was also for commercial reasons that the early French fur traders in Canada built a trading post here in 1750. Then, in 1764, shortly after the ceding of New France to Britain at the close of the Seven Years War, the British began construction of the first Fort Erie on the riverbank, somewhat north of the location of the present Fort. 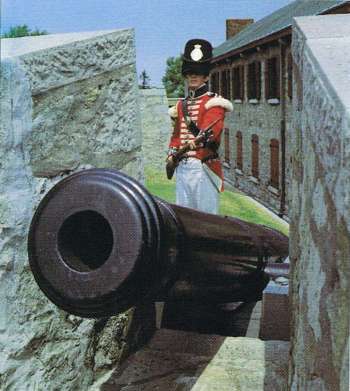 In the summer of 1764 the British, under General Bradstreet, organized a retaliatory expedition against the western Indians in revenge for the attacks made on British outposts by the Indian forces under Pontiac. Bradstreet arrived at Fort Niagara in July, 1764, and on July 7 he ordered his chief engineer, Captain Montresor, to proceed to the outlet of Lake Erie and select a proper place for fortifications. Montresor reached Lake Erie the next evening and after a day spent in exploration finally chose the site of the first Fort Erie on the west bank of the Niagara at the head of Lake Erie. He described its location as “on the northwest side just at the discharge.” On July 10 he reported to Bradstreet who approved the site, and a week later Montresor set out with 500 men to build the new post. This first Fort Erie was a rectangular enclosure composed of four bastions with connecting walls or curtains, as they were called. Adjacent to the lake the two demi-bastions with their curtains were rubble masonry of moderate height. The remaining bastions and curtains consisted merely of upright timbers in the form of a loopholed stockade. There was no ditch of any kind. Log barracks, officers’ quarters and a large storehouse were built within the enclosure, and ground was leveled for a parade.

In March 1779 a furious storm drove great masses of ice ashore, flooding most of the fort and making breaches in the curtain facing the river. What remained of the walls and palisades was so damaged that it was considered necessary to rebuild the fort in a different manner, with stone and mortar. The second Fort Erie, located somewhat farther south, was built by detachments of British regiments. 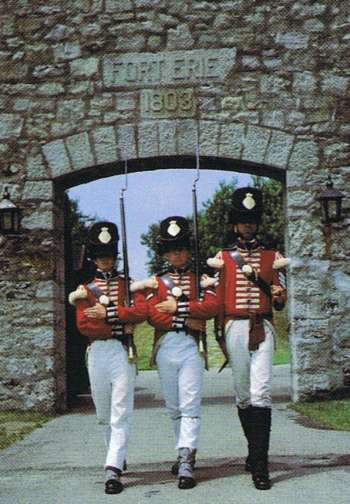 The second Fort Erie withstood the assaults of wind and weather for almost a quarter of a century until February 5, 1803 when another notable storm breached its walls and filled the interior with masses of ice and water. In July of that year, Colonel Gether Mann, who commanded the Royal Engineers in Canada, inspected the post. He reported to Lieutenant-Colonel Hunter at Fort Niagara that the existing Fort was extremely defective in’position and recommended that a new Fort of a more permanent nature should be constructed upon rising ground immediately to the rear of the old location.

The new fort proposed by Colonel Mann was to consist of four bastions connected with curtains in the form of a simple square with all works and buildings constructed of solid masonry. It was to be large enough to accommodate two or three hundred men. Colonel Mann’s recommendations were forwarded to the Master-General of the Ordnance and on January 9, 1804, Colonel Hunter was authorized by Lord Hobart, British Secretary of State, to direct that “the proposed works be commenced and carried on gradually as circumstances might render expedient.” Britain was preoccupied with the Napoleonic Wars in Europe and so military works in the Colonies were not given priority. Work was carried on for almost three years until the end of 1807, when it was stopped by order of Lieutenant-General James Craig on his arrival at Quebec.

Fort Erie was still in an unfinished state when war broke out in 1812. It was garrisoned by regular troops and militia until May 27, 1813, when news was received of the capture by the Americans of Fort George and Newark. The fort was then dismantled, the magazines exploded, and the small garrison retreated to join General Vincent’s forces at Burlington Heights. It was occupied by a regiment of the regular American Army until June 9, when after setting fire to the barracks and storehouses, they abandoned the fort. The British later re-occupied it and stationed a small garrison there. 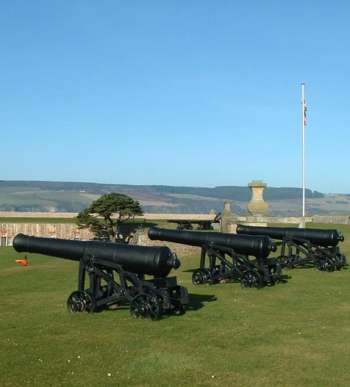 On July 3, 1814 Fort Erie was attacked by an American force of 4500 men under Major-General Jacob Brown. The British garrison, under Major Buck consisted of only 175 men. Buck realized that his position was hopeless and he surrendered the Fort. The American force, leaving only a small detachment to guard the Fort, advanced along the river road toward Chippawa. On July 26, the American Army, considerably reduced in strength after the Battles of Chippawa and Lundy’s Lane, returned to Fort Erie. On August 2, the British appeared before the Fort and prepared for an assault on the American position. The British attack began at two o’clock on the morning of August 15 and in the course of the action the British forces penetrated the Fort’s defenses and established themselves inside Fort Erie around a captured artillery position. Extra supplies of gun powder were stored under the gun platform in a pit which also held a large amount of other ammunition. During the course of the fighting, this store of gunpowder and ammunition blew up, killing 300 officers and men of the British invaders. The remaining British withdrew from the Fort itself and took up positions outside the Fort, staying there until mid September, when they lifted the siege and withdrew to Lundy’s Lane, leaving the Fort in American hands.

Fort Erie was held by the American Army for another month and a half until they decided that the retention of the Fort was of no further strategic advantage to them. In order that the Fort would be of no further value to the British, the bastions were blown up by mines and the buildings burned. Taking its stores and equipment, the American garrison withdrew to Buffalo. The British never rebuilt Fort Erie as a military post.