The Niagara River is one of the most celebrated and visited rivers in the world. It is here where a mighty river divides two countries; New York State on one side and Ontario Canada on the other. During the length of its 56 km course (35 miles) the river is interspersed with a magnificent falls, rapids, a whirlpool and a gorge. 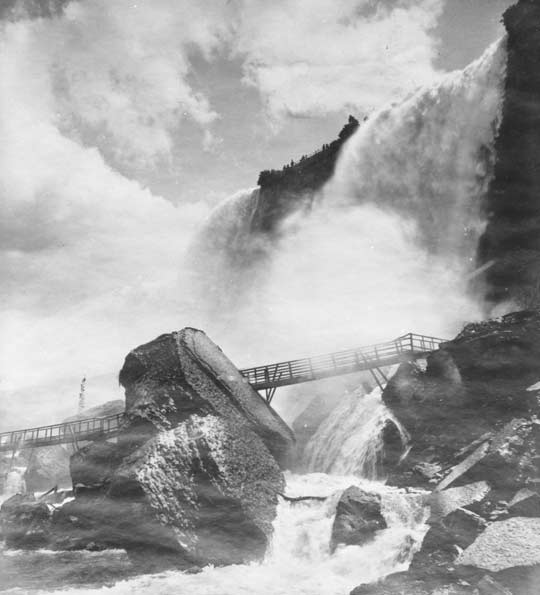 The falls were formed after the receding glaciers from the last Ice Age, around 12,000 years ago formed the Great Lakes, which, in turn, carved a path through the Niagara

Escarpment on its journey to the Atlantic Ocean.

This monstrous glacier crept across the continent with enormous force, carving huge chasms, grinding up rock and anything else in its path.

When the Niagara River began cascading over the 250 ft. escarpment, the pounding water quickly wore away the soft shale under the upper layer of limestone. As more and more shale was washed away, the limestone became unstable and finally broke off. This process would be repeated over and over until the falls reached its present location.

The original falls were located near the site of Queenston, Ontario. Erosion has caused the waterfall to retreat several kilometers southward. During the last 200 years the Falls have been moving steadily upstream.

The Horseshoe Falls has receded 865 feet since 1764. Although much has been done in the last 100 years in the way of engineering, if left unchecked the river will eventually drain Lake Erie. Engineers are presently working to deter this inevitable event.

Although not the highest waterfall, Niagara Falls is very wide with more then 4-6 million cubic ft of water flowing over the brink every minute. Efforts have been made to harness the power of the mighty falls and rapids.

Today 50 to 75% of the Niagara River’s flow is diverted via four huge tunnels, located farther upstream. The water coming down the river then passes through hydroelectric turbines that supply power to Canada and the United States before returning the water to the river farther downstream, past the falls. This harnessing of the Niagara River for electric power has slowed the process of erosion by reducing the amount of water that spills over the falls.