Early travel from the American side to the Canadian side had always been a perilous undertaking and by the mid 1800’s there appeared a definite need for a sustainable method of crossing the Niagara gorge. As early as 1825 private ferry services had sprung up along the banks of the river. 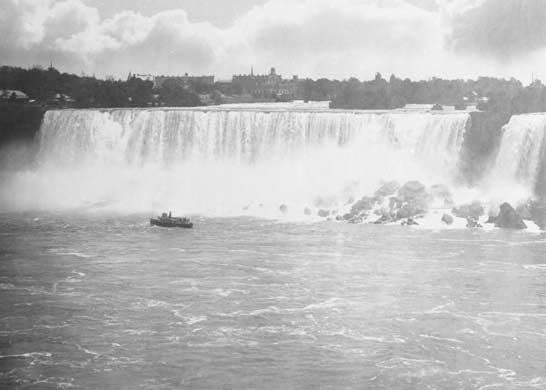 An early photograph of the Maid of the Mist

Usually the captain of these tiny vessels was the farmer who owned the land where the dock was located. A 1941 Niagara Falls Guidebook makes reference to these tiny rowboats that plied the river, sometimes numbering up to 40 or more. Usually these trips from the American side to the Canadian side were uneventful, and there are no accounts of any accidents taking place.

In May 1846 the first steam powered Maid of the Mist was launched with much fanfare. It was a large barge like vessel with two smokestacks, weighing in excess of 100 tons. For several years it transported goods and people across the river, however in 1848 the first suspension bridge was built over the gorge and this greatly impacted the ferry service.

Goods and services no longer had to be transported over the river. However there was a new burgeoning industry – the tourist industry, and while the Maid of the Mist no longer carried travelers from one side to the other, they now carried a new breed of traveler…. those who wanted to view the beauty of the falls close up, and willing to pay for it. 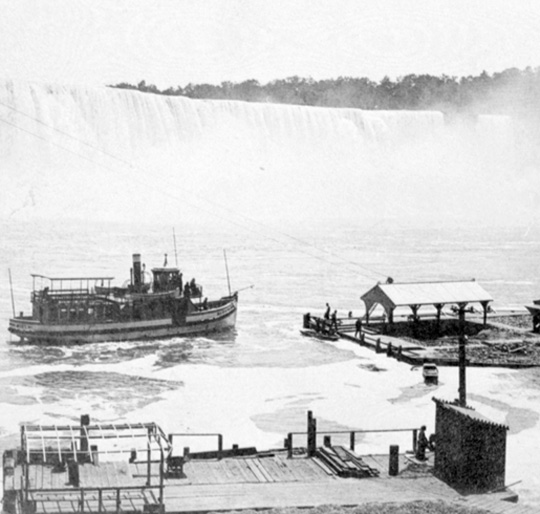 Maid of the Mist approaching the landing on the Canadian side, [ca. 1880]

Many paintings and sketches of the time depict the Maid of the Mist in the foreground with the Mighty Niagara as the background.

In May 1854 a new larger Maid of the Mist was launched. This boat was a steam driven single stack vessel powered by a 100 horsepower engine.

One of it’s earliest patrons was King Edward VII, Prince of Wales, who on September 15, 1860 made a sightseeing excursion on the Maid of the Mist to the base of the American Falls.

This second Maid of the Mist was in operation until the fall of 1860. In 1861 the boat was sold at private auction and purchased by a Montreal firm on the condition that it be delivered to Lake Ontario.

This would mean that the Maid of the Mist would have to be navigated down the Niagara River, through the Whirlpool Rapids, the Whirlpool and the Lower Rapids. Most believed that it was an impossible feat but Cpt. Robinson accompanied by two other crew members undertook the trip.

The boat set out from the dock in Bellevue, New York and within minutes it was being tossed about in the Whirlpool rapids. Later it would arrive in Queenston, slightly damaged, the first boat ever to arrive there from the west. (See Captain Joel Robinson) 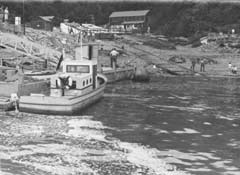 An early photograph of the Maid of the Mist Landing

For almost another twenty-five years there would be no ferry service on the Niagara River. During this time any ferrying on the river was done exclusively by small rowboats. By the late 1870’s and with the advent of the railways, thousands of tourists were streaming into Niagara Falls.

In 1884 a new Maid of the Mist, the third such vessel, was built by R.F. Carter and Frank LeBlond. This third Maid of the Mist proved to be so successful that a second ship was added to the fleet. These two new ships were more powerful then ever and brought tourists closer and closer to the base of the falls.

It is reported that Captain Carter made sixty thousands trips without incident ferrying passengers back and forth from the base of the falls. In August, 1955, a new and larger Maid of the Mist was built in Owen Sound and transported to Niagara Falls in four pieces. This new boat would be built entirely of steel.

Perhaps the Maid of the Mist’s most heroic moment came on June 9th, 1960 when a seven year old boy, Roger Woodward was swept over the falls while out boating with friends. A quick thinking captain observed an orange life jacket in the swirling rapids and upon closer examination he realized that a young boy was alive and struggling against the current below the falls.

Had the Maid of the Mist not been in that location at that particular time to rescue the boy he would most likely have perished.

Today, the four Maid of the Mists take tourists on an amazing journey to the base of the falls.

Sandra Koeller
March 23, 2018
Who, please, is the painter of "The Legend of the Maid of the Mist" (above) and do you know if there are prints for sale anywhere? Thank you.
Reply