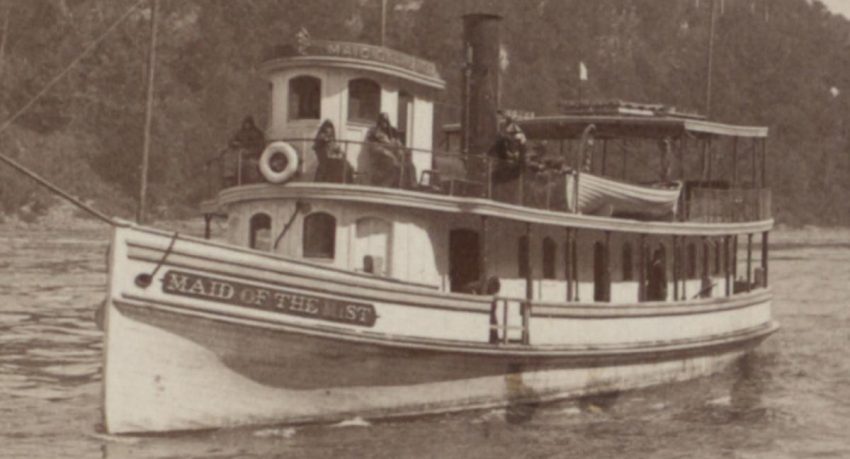 the maid of the mist story

This is a version of a story that is told by the people of the Six Nations. The “standard” Maid of the Mist story that is commonly told in Niagara today is not actually a Native American story at all. It was, apparently, the invention of a 19th century European anthropologist. Its themes of cruel gods and human sacrifice are alien to the Six Nations people.

The following presentation of the “correct” story should not be taken as an authoritative telling of the tale. It is a written version of a story that is best told orally, and is subject to the cultural biases of both the writer and the English language. It should be taken as a rather dim reflection of the richness of Niagara’s native culture.

“When people knew the wholeness of the world, they knew that all are one with the world. They spoke with the earth and the sky, and knew them as themselves. The sun, the moon, and the stars spoke with them, and people were one with them. They knew the animals and the plants as their brothers and sisters. The thunder taught them about what is and what will happen. People knew all these things, and knew the wholeness of the world.

But people forgot. The earth and the stars and the animals and the Thunder continued to talk to them, but people didn’t always listen. Sometimes they couldn’t even hear what was being said to them. As they forgot their oneness with the world and with each other, some people became selfish, or mistrustful, or jealous of others.

All in all, however, people became more and more deaf to the words of the Thunder.

This story tells about the last time that the Thunder ever spoke to a human.

No one had heard from the Thunder for a long time when a girl, one of the people who lived in Niagara, lay down under a tree one hot summer afternoon to sleep. While the girl was sleeping an old woman of the people happened to pass by, and she noticed a small snake-like thing starting to crawl underneath the girl’s dress. The old woman didn’t even bother to wake the girl and warn her. She simply went on her way. in fact, the old woman never told anyone what she had seen, so the girl never suspected that anything might have happened to her.

When the girl became a young woman she found a young man, and they were very happy together. It wasn’t long, however, before the young man died. After a long while the young woman met another young man, and they were happy together. Before they could raise a family, however, the young man died. A third time, the young woman found a man she liked. Again, he died. The young woman was confused and afraid. She suspected that something might be wrong with her, but had no idea what it could be. She was embarrassed to admit her fears to anyone, and had no idea where to turn for help. The old woman, who could have helped her by telling her what had happened, never said a word to her. The people had traveled far along the path of mistrust and selfishness. ”

The woman decided to kill herself. One night she put a canoe into the river above the falls, climbed in, and pushed out into the current. The canoe shot down the rapids and plunged over the edge of the Falls. Instead of falling to her death, the woman felt the canoe being lowered slowly to the base of the Falls. As the boat settled gently into the water, she heard voices in the darkness. She felt hands touching her, drawing her out of the canoe and leading her behind the Falls, but she couldn’t see who was guiding her.

“When they were behind the Falls, she was able to see clearly. She found herself in a cave with a high ceiling and many people in it. These were the Thunder beings. They explained to her that they were invisible in the outside world, but that they became visible when they were behind the waterfall. An old man of the Thunder people asked the woman, ‘Why did you try to kill yourself? You were created with a soul and a mind, and you were given a number of days to walk with Nature.’ He went on to explain what had happened to her the day she had slept under the tree, and promised to help her.

The Thunder beings built a tiny fire on the floor of the cave, and one brought medicine. The young woman was told to stand over the smoldering fire so the smoke could rise around her. “As she stood there, a tiny snake-like thing dropped out of her dress and crawled away, growing larger as it went. The old man said to the woman, ‘There’s nothing wrong with you now. You’ll be able to have a husband and children when you go back to your people.

’You can’t go back to them right away, though. You’re too full of power to go among them safely just yet. Stay with us here behind the waterfall, and be my grandchild until you’re able to return to your people.’ The young woman lived with the Thunder people for four years. Then, one day, they told her that they were going to move away from the Falls.

’The white eyes are pushing in on us,’ they said. ‘You can go back to your people, but be careful not to touch anyone until you’re like them again.’ The Thunder beings also spoke to the woman’s people and told them to accept her as one of themselves again. ’Don’t try to touch her, or ask her to handle anything,’ they said. ‘Let her be one of the people, and she will be like you once more.’

It was four more years before the power of the Thunder wore away from the young woman, but she was eventually able to be one of the people. She met a man, and they raised a large family. The Thunder had spoken with the people, but that was the last time that anyone ever heard from the Thunder beings again.”