The “Maid” Shoots the Rapids 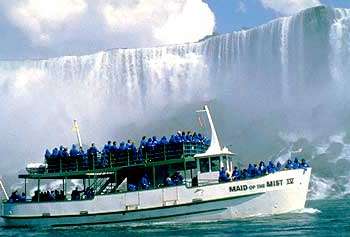 Two miles down river from Prospect Point begin the mighty Lower Rapids, doubtless the most violent stretch of water in fhe world. As we stand watching the trim little  “Maid of the Mist” in the great basin below, it will interest us to know that many years ago one of her sister ships made a voluntary trip through the Lower Rapids and that her courageous crew arrived safely at Queenston, Ontario, seven miles down river. At that-time, the “Maid” docked: a mile downstream near a restriction in the River called . the Swiftdrift, where the water picks up a speed estimated at twenty-seven miles an hour just before it rushes into the Lower Rapids. The River, broad and apparently placid, although with treacherous current and a depth of 150 feet, suddenly encounters a narrow passage and a barrier of great rocks over which it dashes with uncalculated force. Here the depth is but thirty-five feet.

It was during the afternoon of June 6, 1861, that Joel Robinson, captain and pilot of the “Maid of the Mist,” cast off from the landing with his fireman and assistant. Heading upstream, he suddenly hove to and dashed straight for what appeared to be certain death. This turned out to be one of the boldest marine exploits in history. The craft had been sold to certain operators on Lake Ontario, but only on the condition that she be delivered intact and ready for service to her new owners. Like the present fleet of two “Maids,” she had been built near the base of the Falls and had never before steamed beyond the sound of their thunder.

As the sturdy, little “Maid” plunged headlong into the great waves, the wheel was wrenched from Robinson’s hands, and the craft was thereafter committed to the slim mercy of the current. The firemen below clung desperately to a stanchion and prayed, while Robinson and his mate clung to the binnacle and awaited what seemed to be certain death.

The craft lost her funnel; water, lashed to fury, washed her decks. She creaked and groaned but swept forward until the calm waters beyond were reached. A few minutes later, still proud and poised like the good little ship she had always been, she pulled up to the dock at

Queenston, and the good captain tossed her hawser over to the waiting dock hand.

First to board was the Scotch Collector of Port, who, although this was the first ship to reach there from upstream, demanded his entry fee.

To the “Maid of the Mist” Below 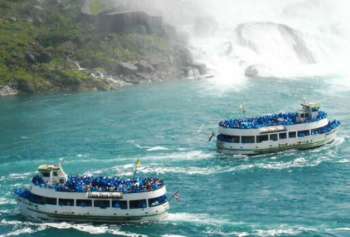 For years now, the Le Blond family, first the father and now the son, Frank Le Blond, has been the owners of the sturdy “Maid” fleet. Both father and son have conducted many of the kings and queens of the world on the breath-taking cruise in the great misty basin below the Falls. The boats may be boarded on the Canadian or American sides, the management supplying the waterproof dress needed for this, the shortest and most scenic water trip in the world.

Quietly and safely dropping the 160 feet and emerging from the connecting tunnel into the Gorge, we may again be reminded of the need of raincoats. Regardless of wind direction, which may be good or bad, climbing among the rocks at the base of the cataract will be uncomfortably moist, if the best views are not to be missed.

It is this vantage point more than any other that truly reveals the immensity, the power, and the majesty of the spectacle we have come to see. Many linger here for hours, held captive by beauty alone.

During the winter time the rocks piled high above us become covered with ice, forming what the local people call “ice mountains.” Years ago the authorities, more lax than they are today, permitted the boys of the town to slide down the mountains  always, of course, with the prospect of accidentally going down the wrong side and ending up under the crushing water pouring over the brink. Dangerous playground this; but the boys came with all manner of sleds, from barrel staves to burlap bags.

Back in the 1870’s, young Alex Landreth, later to become one of the great photographers of the cataract, was especially proud of his sled which he had assembled from a parted whisky keg. A beautiful lady touched Landreth on the arm and asked if she might share a ride with him. Up they went and down they went, the young fellow losing control of the conveyance and the occupants rolling over several times during the descent. The lady regained her feet, brushed herself off, and reached into her pocketbook for a five-dollar note. Handing it to the surprised kid, she said, “Tell your mother Sarah Bernhardt gave this to you.”

Before we leave this lovely spot, let us recall the days of the tiny ferry-boats that used to be rowed across the River by the strong arms of the hardy ferrymen, S. L. Ware and J. Shuterburgh. They collected eighteen cents for each passenger, the ladies with their hoop skirts and tiny parasols and the men in their frock coats and beaver hats. That was in the romantic 1830’s and forties, when one had to climb the long wooden stairs to the top of the cliff. The little park above then had a primitive air about it, with an occasional Indian brave sitting on the ground with his squaw selling wild flowers or a little bundle of sassafras bark. Senecas, Tonawandas, or Tuscororas, no doubt  still did they “Listen for a Lonesome Drum,” the story of which was so charmingly told by Carl Carmer in his book bearing that title.

The Maid of the Mist is a must for all visitors to the Niagara area! (The Niagara Falls Great Gorge Adventure Pass is a good deal show your AAA or CAA card and it cost about $30CD per person for unlimited people mover and incline railway rides for one day and admission to The Maid of The Mist, Journey Behind the Falls and the Butterfly Conservatory. ) Don’t froget to walk across the Rainbow bridge and walk through the New York side of the falls. It is such a pleasant walk and it gives you different views of the falls. Be sure to walk over to Bridal falls it is just beautiful from the New York side.

Don’t have the guts to take the plunge? The next best thing is to put on a poncho and get up close and personal with the Falls. A boat takes you under the falls! This is an experience that cannot be described! It is amazing!

This is a MUST DO!!! Tips–Look down to see which side is less crowded–US or Canadian–both are the same ride/view. While we were there, the Canadian side was MUCH more crowded than the US side. (probably 100-150 people in line) We drove across the bridge, walked up and bought tickets, and were on the boat. It was literally in less than 15minutes. In my opinion, they could charge 3 times what they do and it would still be worth every SINGLE penny! WOW!!
(The views from the Canadian side are much better-US side has many more grassy/park areas, you’re closer to the ‘mist’ and it is really neat to see the water build up and fall right in front of you. Both sides are different and REALLY worth seeing.

This ride was great, better than any water ride at an amusement park. The view was just breath taking, my mate and I went on the Mist, September 3. The weather was beautiful and you will get wet, no doubt about it. The boat was so close to the falls, it felt like you were in the middle of a Tornado. The rain pouch tried it’s best to keep us dry, but the wind wouldn’t allow it to stay down, so you had to fight the wind and the rain.

I took of my shoes because before you even get on the boat it’s wet, in order for me to walk after the boat cruise, I just took of my shoes. It was such a hot day that the ride was a refreshment. I would recommend that if you go to Niagara Falls, you can’t leave before you get on this ride.

Despite visiting in October (therefore outwith the peak summer months), the area around the falls was heaving with organised tour groups. Once on the boat, I got a good position on the top left railing but was having to hold onto that bit of railing for dear life due to the large degree of pushing and shoving by other tourists to get a better spot (I don’t think the boat was even that busy). This somewhat spoiled the trip for me, but thankfully not enough to overcome the amazing feeling you get when you pass by the falls, particularly horseshoe.