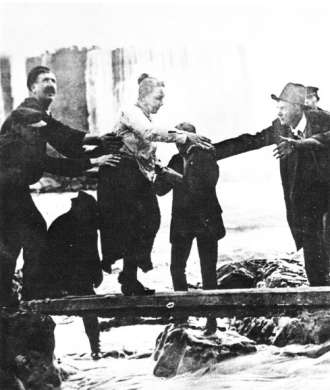 Annie Taylor after she had been taken out of her barrel

The first barrel trip over the Falls

The first barrel trip over the Falls was made by Annie Edson Taylor, a school teacher from Bay City Michigan, on October 4, 1901. Annie’s barrel was curiously constructed, tapered almost to a point at the bottom and bound with metal hoops. It was padded with pillows and had a 45.4 kg (100 lb.) anvil in its bottom to keep it upright as it floated downriver.

It had an air supply, “enough to last her a week”, forced into the barrel with a common bicycle pump after the barrel’s lid was closed. To ensure that the barrel would float down the river and over the Horseshoe Falls, it had to be set adrift in the Canadian current. It would have been impossible for Canadian authorities to stop her trip even if they had wanted to, because Annie’s handlers towed the barrel from Grass Island on the United States side and into the Canadian current where it was set adrift at 4:05 p.m. The barrel tipped slightly forward as it went over the brink of the Horseshoe Falls and disappeared behind the curtain of falling water. Seventeen minutes later it floated out from behind the Falls and was stranded on the rocks close to the location of the present day Table Rock Observation Platform. The barrel was opened and Annie Taylor emerged, delirious and with a slight cut on her jaw. She made the trip in an attempt to achieve fame and fortune but achieved neither in her lifetime. She died in the poorhouse twenty years later. 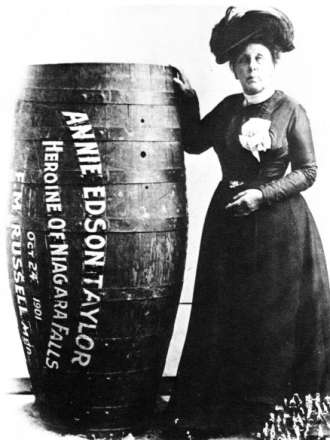 She achieved fame, but not fortune. She died in the poorhouse twenty years after the trip

Bobby Leach, a native of Cornwall, England began his career as a daredevil on July 1, 1906. Supported only by a frail parachute he survived a drop into the the Niagara River from the Upper Steel Arch Bridge. In June 1907, Leach was a spectator at Madison Square Gardens in New York City when Captain Paul Donaldson, diving from a platform 46.9m (154 ft.) high into a tank of water only 1.52m (5 ft.) deep, was killed. Leach immediately offered to replace the dead man in the stunt. The programme was continued and Leach made a successful dive. He returned to the Niagara area with his reputation as a daredevil firmly established. In 1908 he announced his intention to go over the Horseshoe Falls in a rubber ball but the trip didn’t materialize because he couldn’t make arrangements with the railway companies for financial backing. Instead he made a trip in a barrel through the Whirlpool Rapids in 1909. In 1911 he again planned a trip over the Falls in a cylindrical steel barrel. On July 25, 1911 Leach made the plunge over the Horseshoe Falls and lived. His barrel was badly dented, he suffered a fractured jaw and two broken knee caps and spent twenty three weeks in hospital recuperating. In an attempt to capitalize on his fame in the area he went into the restaurant business in Niagara Falls, Ontario.

It was not until 1925 that he returned to the limelight. At that time he attempted to swim the Niagara River below the Falls. He had to abandon the attempt due to an unusual circumstance. His false teeth slipped out of his mouth when he had gone half way across and in grabbing for them he swallowed so much water that he was unable to continue. His next feat was successful, another parachute drop, this time from an airplane over Falls View. Soon afterwards he left on a vaudeville tour of Australia and New Zealand. In New Zealand he slipped on an orange peel while out walking, injured his leg and was hospitalized. Complications led to the amputation of one of his legs, gangrene set in, and he died there on April 29, 1926, at the age of 64.

Charles Stephens, a barber from Bristol, England, was the next to challenge the Horseshoe Falls. His previous experience as a daredevil was in jumping with a parachute from an airplane and putting his head in the mouths of lions. For the trip over the Falls on July 11, 1920, he used a hooped oaken barrel. Stephens was concerned that he would land on his head, so he had himself strapped in the barrel with a heavy anvil tied to his feet. Annie Taylor also used an anvil for ballast but she had better luck. Stephens’ barrel broke into pieces when it hit the water at the bottom of the Falls, the anvil sank, taking Stephens along with it to the bottom of the river. Only pieces of the wrecked barrel, along with a man’s arm with a strap attached to it, were found after this unsuccessful trip. 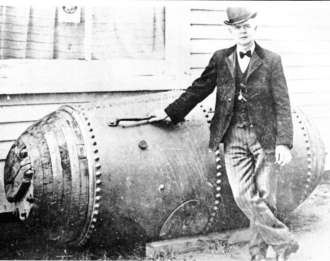 On July 4, 1928, Jean Lussier a machinist from Niagara Falls, New York, made a successful trip over the Horseshoe Falls in a 1.8m (6 ft.) rubber ball which he designed and built himself. The ball had a framework of steel bands covered with automobile tire material and was lined with interconnecting rubber compartments filled with oxygen under 15.9 kg (35 lbs.) pressure. The ball floated on the surface of the water and was out of sight for only 65 seconds after going over the Falls. Lussier survived the trip, suffering only a bump on his forehead.

George Stathakis, a Greek cook from Buffalo, lost his life in an unsuccessful trip over the Horseshoe Falls on July 4, 1930. His heavy oak barrel dropped behind the curtain of falling water and spun around in the backwash of the Falls until the next morning. When the barrel was pulled ashore and opened, Stathakis was dead, suffocated. His pet turtle, taken along for good luck, survived.

Major (his given name, not a military rank) Lloyd Hill attempted a trip over the Falls in 1950, but was taken out of his steel barrel when it grounded on the Canadian Niagara Power Company’s weir in the upper river above the Falls. His handlers were prepared to push him back into the current but thought better of it when the Niagara Parks Police who had arrived on the scene, cautioned them that they would be held personally responsible if Hill lost his life.

William Red Hill Jr., a brother of Major Hill, lost his life on August 5, 1951 when he attempted a trip over the Horseshoe Falls in “The Thing”, a strange contraption made of thirteen inflated inner tubes, tied together with canvas webbing and fish nets. Thousands of spectators had assembled along the river banks to see the spectacle and watched in horror as a twisted tangle of inner tubes and a red air mattress were all that emerged from the base of the Falls.

The most mystifying trip over the Falls 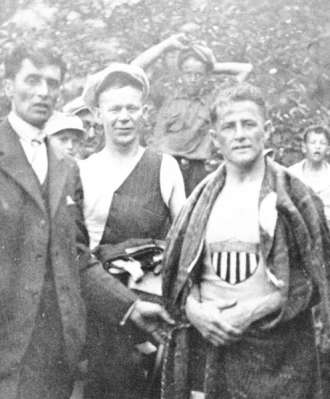 On July 15, 1961 the most mystifying trip over the Falls occurred. At 10:56 a.m. several calls were received by the Niagara Parks Police reporting a dark “ball” in the river above the Horseshoe Falls. Corporal Alex Sawada was sent to investigate. Niagara Parks Police Chief Rehfeld telephoned Captain Lawrence McGinn at the Maid of the Mist Dock and told him about the ball and that Corporal Sawada was on his way to investigate. With Corporal Sawada, Captain McGinn of the Maid of the Mist Company took the Company launch out on the river where the ball, having gone over the Falls, was already floating in the turbulent water at the base of the Horseshoe.

By the time they reached the ball it was already out in the river current and floating downriver. They drew up alongside and debated as to whether anyone was really inside. The top was already open and a head popped out. William FitzGerald, known by the pseudonymn Nathan Boya, was the stunter. He describes what happened next. “Corporal Sawada first asked me if I were O.K Then he said, ‘Grab hold of the boat’. The second I touched the boat, he added, ‘You are under arrest’ “. In describing his trip Boya says:”The cover was not completely off but banged loose in a kind of waffle pattern. It was ripped out of my hands after the Plunge-O-Sphere went over the Falls and began righting itself.”

Boya was helped out of the ball and into the launch which then proceeded to the Maid of the Mist dock, with the ball being towed behind. The party was met by a Canadian Customs official who impounded the ball. Boya was questioned by both Canadian Immigration and Customs officials and then due to his complaint of a possible chest injury, he was taken to the Greater Niagara General Hospital for observation. The following Monday he appeared in court, paid the fine assessed which was $100.00 and $13.00 in courts costs, and returned to New York City, giving no explanation for his stunt.

Niagara Falls Daredevils: Those Who Took The Plunge