There are a multitude of theories on the origin of the name “Niagara falls”, which is one of the most spectacular and famous naturally occurring wonders in North America, perhaps the world.

In the middle of the last millennium, Europeans reached North America and began to explore its vast natural wonders. Seventeenth century maps of French explorers refer to a native tribe in the area as “Niagagarega”. Other documents dated as early as 1641 include the term “Onguiaahra”, a native word thought to mean “The Straight”, or perhaps to carry the more romantic meaning “Thundering Waters”.

Its Geological formation, however, is less of a mystery. About 10,000 years ago, the Wisconsin glacier plowed across the region like a giant bulldozer, carving out valleys and channels, and damming others with earth. When the enormous ice sheet eventually melted, the upper great lakes emptied into what is now the Niagara River, and ultimately into the Atlantic Ocean. The constant flow of water over the rock face now known as the Niagara Escarpment cut a gorge in the earth and slowly the falls retreated, from its original location near Queenston, Ontario, to its present location. 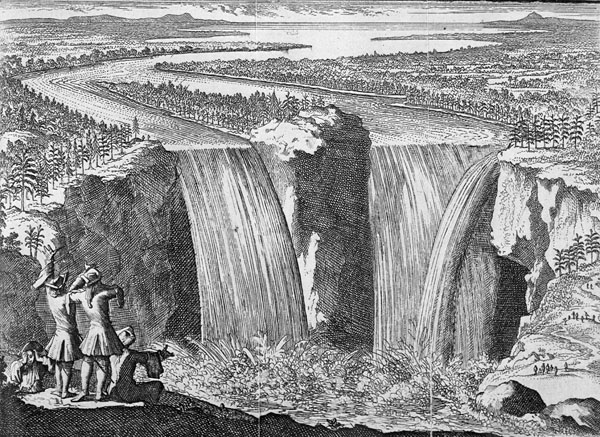 Since the falls’ discovery its popularity has only grown over the centuries. French explorer Samuel de Champlain and Belgian Father Louis Hennepin are among some of the historic figures to first explore and describe the falls in the 17th century, increasing their popularity among Europeans. As early as the 18th century, the falls became a tourist destination, particularly a romantic destination for honeymooners, attracting such notable newlyweds as Jerome Bonaparte, brother of notorious French military and political leader Napoleon. The falls are no stranger to fame; reportedly legendary New York Yankee slugger Joe DiMaggio visited Marilyn Monroe in Niagara while the iconic actress was in town shooting the 1953 movie “Niagara”. In 1943 British Prime Minister Winston Churchill described his leisure drive down the Scenic Niagara River Parkway as “the prettiest Sunday afternoon drive in the world”.

The industrial revolution and World Wars of the late 19th and early 20th century brought change to the Niagara Falls region once again. In 1853 the Niagara Falls Hydraulic Power and Mining Company was chartered, and began constructing canals which would harness the enormous power of the falls to generate electricity. By 1896 the transfer of electricity across distances was possible and power was sent as far as Buffalo New York, roughly twenty miles away. Today there are 2 major power generating plants on either side of the falls, generating a combined 4.4 billion watts of power.

Around this same period the New York Central Railroad was promoting Niagara Falls as a leisure and honeymoon destination, and the increased traffic to the area inspired the replacement of the existing wood and stone bridge with a steel arch bridge known as the Whirlpool Rapids Bridge which still carries trains over the Niagara Gorge and River to this day. At the end of the First World War, tourism was on the rise again, and Niagara Falls was more popular than ever.

Although Niagara Falls remains famous for beauty and lore, efforts are constantly underway to carefully balance the two major draws of the area, tourism and industry, particularly power generation. The stewards of Niagara falls have always been challenged by the task of harnessing the great natural power and resource of the falls for industrial purposes, while maintaining its aesthetic appeal and beauty and leaving this natural wonder of the world unscathed by the modern world.