Sam Patch Before arriving in Niagara the young Sam Patch had already achieved a degree of notoriety by some of his previous jumps. He had performed in front of crowds in New Jersey, jumping into the Passaic Falls.

When approached by local hotel proprietors he decided to take them up on their offer. A diving platform was built on Goat Island between the Luna Falls and the Bridal Falls at a height of 85 ft.

On October 7th, 1829 Sam Patch became the first daredevil to ever challenge the Mighty Niagara River. He survived this headfirst dive unhurt and on October 17th, 1829 made a second successful dive from a height of 130 feet.

No doubt Sam Patch had plenty of guts. He would hit the water at 60 mph. Anything less then a perfect feet first entry could prove fatal. Mr. Patch’s luck would eventually run out when he attempted a 100 foot dive into the Genesee River in Rochester New York and was drowned.

In June 1911 an invitation was sent out for anyone willing to pilot a plane to the U.S.- Canada International Carnival held in Buffalo, New York, and Fort Erie, Ontario. 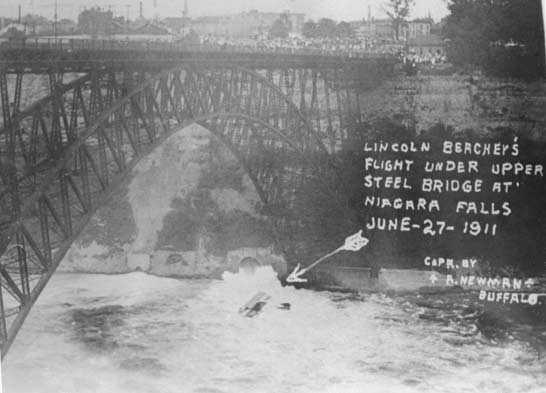 Lincoln Beachy during his flight under the Upper Styeel Suspension Bridge

Lincoln Beachey was then a twenty four year old pilot employed by the Curtiss Aircraft Company of Nebraska. The plane had an open cockpit and two wings. On June 27th Beachey took off from an airport in New York and circled his plane several times over the falls. He then took his airplane to within 20 feet of the rivers’ surface continuing on down the gorge at a speed of 50 mph. He then flew his plane under the arch of the Fallsview Honeymoon Bridge to the astonishment of onlookers.

Lincoln Beachey became the first person ever to fly a plane under a Niagara Falls bridge. Four years later Beachey would lose his life when his aircraft crashed into San Francisco Bay during an exhibition.

Bed and Breakfast Niagara on the Lake & Niagara Falls Hotels