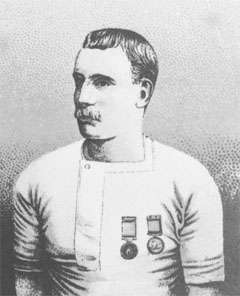 Captain Matthew Webb was born in England in 1848, one of seven children and went to sea at an early age.

In 1875 he accomplished the feat of being the first person to swim the English Channel from Dover to Calais, a distance of twenty-five miles.

He had also been awarded a Gold Medal by the Royal Humane Society when he jumped from a steamer into the water to rescue a man who had fallen overboard.

In 1883 Cpt. Webb visited the falls and inspected the rapids and decided he would be able to swim one of the fiercest set of rapids in the world.

Many told him that he was attempting suicide, but Webb was so confident in his swimming abilities that he believed he could conquer the rapids and finish unscathed.

On July 2, 1883 Webb, wearing no life preserver, set out from the Clifton House Hotel at 4 p.m. The event had been well publicized and there were throngs of spectators lining the bridges and gorge. At 4:25, clad only in a red bathing suit he leapt from a small boat from the center of the river into the rapids. 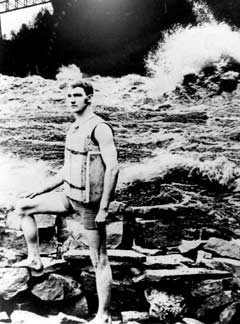 He was seen swimming valiantly under the bridges when a big wave overtook him. Minutes later he was spotted again. Another large wave overcame Mr. Webb and he disappeared under the foaming white water, never to be seen alive again. Webb’s body was recovered four days later in Lewiston.

On August 26th, 1886, William Kendall a 24 year old policeman from Boston Massachusetts traveled to Niagara Falls Canada with the intention of swimming the Whirlpool Rapids.

He had wagered $1,000.00 that he would complete his swim, so at around 2.00 p.m. that Sunday afternoon in August he set off into the water from the landing of The Maid of the Mist wearing only a cork life preserver and his bathing trunks.

Almost immediately he was caught in a counter current. Crowds watched breathlessly as he was tossed and battered by the rapids. Most believed he would meet an untimely end that day.

Tired and weak William Kendall barely made it to shore where he was rescued and revived. He would later state that the trip had been so horrible that he would never attempt a second crossing…no matter what the wager.