Twenty percent of the worlds fresh water is contained in the Great Lakes and most of that water eventually flows over Niagara Falls.

Niagara Falls actually refers to both the city and the waterfalls. The city continues to grow with the arrival of major casinos and additional tourist accommodations but the falls themselves are a timeless, breathtaking site.

Niagara Falls is located on the Niagara River between the United States and Canada. The falls are actually three falls in one: the American and Bridal Veil Falls on the New York side, and the spectacular Horseshoe Falls on the Ontario side. The water cascading over the falls travels down the Niagara River from four of the Great Lakes – Lake Superior, Lake Michigan, Lake Erie, and Lake Huron on its way to Lake Ontario.

The falls formed about 12,000 years ago at the end of the Ice Age. As the last glaciers melted away, huge torrents of water channeled out what today is the Niagara River over the Niagara Escarpment. The water began eating away at the escarpment and the falls slowly moved upstream. Today the falls cascade seven miles from their original location, having carved out the Niagara Gorge.

Five miles below the falls is the Robert Moses Niagara Power Plant, a massive facility providing electricity for most of the Northeast. The worlds first commercial-scale, alternating current generator located there began operating in 1895. Alternating current technology allowed power to be transmitted over long distances for the first time, making possible the widespread use of electricity. As a result the falls are a scenic and a technical marvel.

Tourists make up the vast majority of falls visitors, so peak season is in the summertime, when Niagara Falls is both a daytime and evening attraction. Floodlights on the Canadian side light both sides of the falls after dark, creating spectacular views. If you can, try to see the falls in both the daytime and at night.

There are a number of ways to view the falls. From the American side, the American Falls can be seen from walkways along Prospect Park. The Cave of the Winds trail will lead you down three hundred steps to a point beneath Bridal Veil Falls. The Niagara Scenic Trolley also offers guided trips along the American Falls. 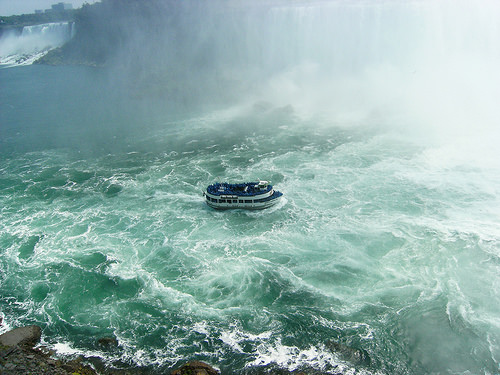 On the Canadian side, Queen Victoria Park contains gardens, platforms offering a spectacular view of both the American and Horseshoe Falls, and underground walkways leading into observation rooms, giving you the sensation of being inside the waterfall. The observation deck of the Skylon Tower provides the highest overhead view of the falls, and if you turn and face away from the falls, you can often see as far as Toronto.

Directly across the river from Niagara Falls, New York is the city of Niagara Falls, Ontario. Many visitors view the falls from both sides the two cities are connected by the Rainbow Bridge.

Interested in a unique view of the falls? Rainbow Air offers helicopter tours over the falls. Combine a helicopter tour with a ride on the Maid of the Mist and you’ll have seen the falls from almost every angle.

Have Your Dream Honeymoon in Niagara Falls