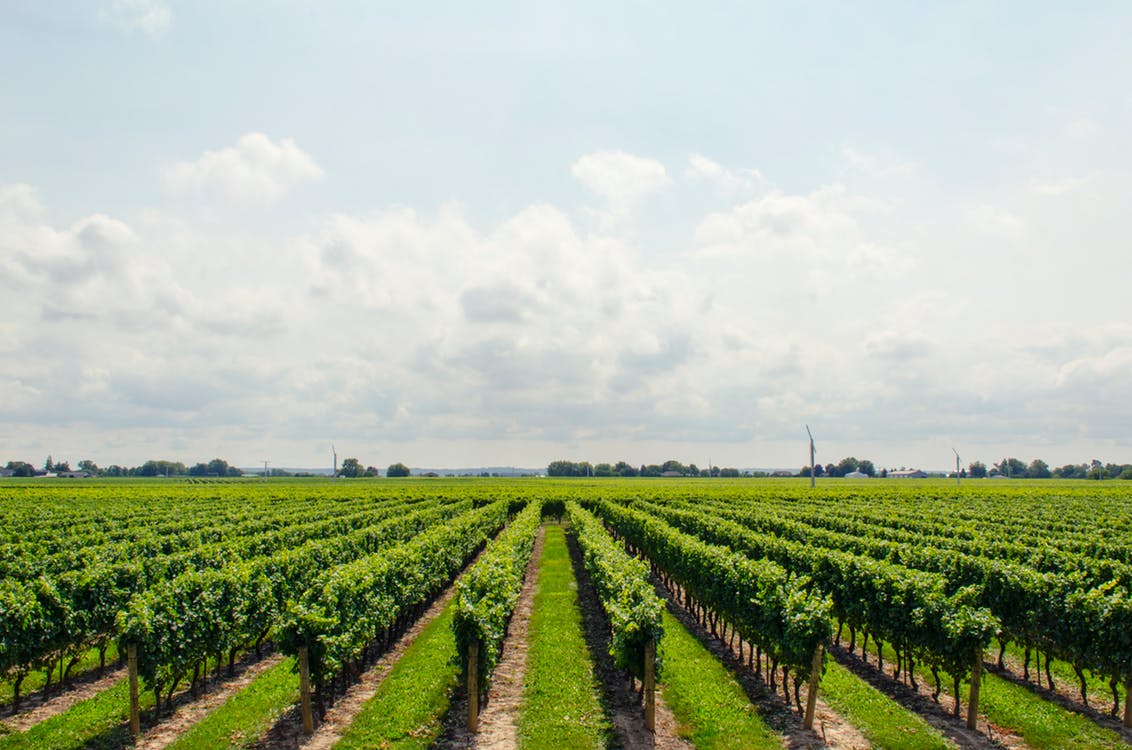 For all those who are interested in taking an international or local wine tour at a vineyard or dine at a fabulous vineyard estate, we are sure you will find all the information needed right here.

The Niagara region is located in the province of Ontario, Canada and is home to some of the most renowned wineries in the world. The Niagara Region is comprised of beautiful, historic and quaint towns and cities, namely Grimsby, Beamsville,Vineland, Jordan, St Catharine’s, Niagara-on-the-lake and Niagara Falls. These areas are known throughout the US and Europe to possess some of the most distinguished vineyards, wineries and wine tours.

Growing grapes and winemaking have been a tradition in the Region for over 200 years. What started as a small industry has flourished into a network of wineries, vineyards and a great community of wine makers. The Niagara Region wineries and vineyards truly celebrate their wines and wineries and this has caused their immense popularity.

Some of the most anticipated events in the area are the: Niagara Wine Festival, Niagara Ice Wine Festival and Niagara New Vintage Festival. In addition to these annual festivals, there are also special activities such Wine Tours, Wine Tasting, and Food & Wine sampling. During these tours, visitors view all components of the wine making process, from the vineyards to the French Oak and wooden barrels that store the wine. Wines can be purchased from the beautifully showcased onsite wine boutiques.

There are numerous vineyards and wineries in Niagara Region that offer remarkable dining experiences at their onsite restaurants. Featuring world class chefs and staff who help redefine the simple phrase “ Food and Wine .” Along with offering exceptional cuisine, they are able to pair each dish with a perfect wine counterpart; making a memorable food and wine pairing any palette is sure to remember. 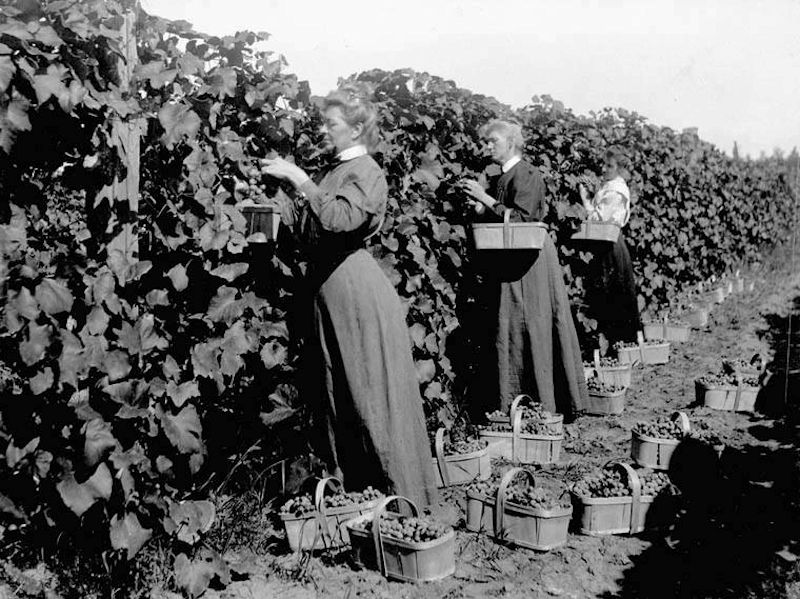 The tradition of wine making in Canada extends back over 200 years. The word wine is traced from the Old English win , which in turn ultimately derives from the Latin vinum.

Early settlers to Canada tried to cultivate Vitis vinifera grapes from Europe with limited success. They found it necessary to focus on the native species of Vitis labrusca and Vitis riparia along with various hybrids that were more conducive to the Canadian climate.

During the 1970’s Canadian wineries began to successfully grow Vitis vinifera and found that high quality wines could be produced if Vitis vinifera vines were grown with reduced yields, along with new trellising techniques and appropriate canopy management.

The 1990’s were years in which Canadian vintners first successfully demonstrated that fine grape varieties grown in cooler growing conditions could potentially possess more complex, delicate and longer aging potential properties than their counterparts in warmer growing regions of the world.

The Niagara region’s temperatures are influenced by Lake Ontario , which acts as a hot water bottle in winter – raising winter temperatures on land from its summer-warmed waters. Vineyards benefit from the lake’s offshore breezes, which are reflected back to the lake when they reach the escarpment, maintaining constant and active airflow. This circulating activity prevents cold air from settling in lower-lying areas during threatening periods of frost, and maximizes the moderating effect of the warm waters of the lake.

In spring, breezes from its winter-cooled waters help to hold back the development of fruit buds until the danger of late spring frosts have passed. Lake Ontario also cools the summer air so that grapes do not ripen too quickly, and then keeps the fall air comparatively warm so that the first frost is delayed, thus extending the growing season. The length of the growing season varies. As in other temperate growing regions, each vintage varies depending on the season. Rain, humidity, cold, and drought can all limit the ripening period.

The vine buds break open on average from late May to early June with harvest generally beginning in mid-August for French hybrids such as Baco Noir, and mid-September through October for varietals such as Pinot Noir, Chardonnay, Riesling and Cabernet Franc.

Late harvest styles are usually harvested in mid November, with Icewine harvests occurring between mid-December and the beginning of January, depending on the weather. 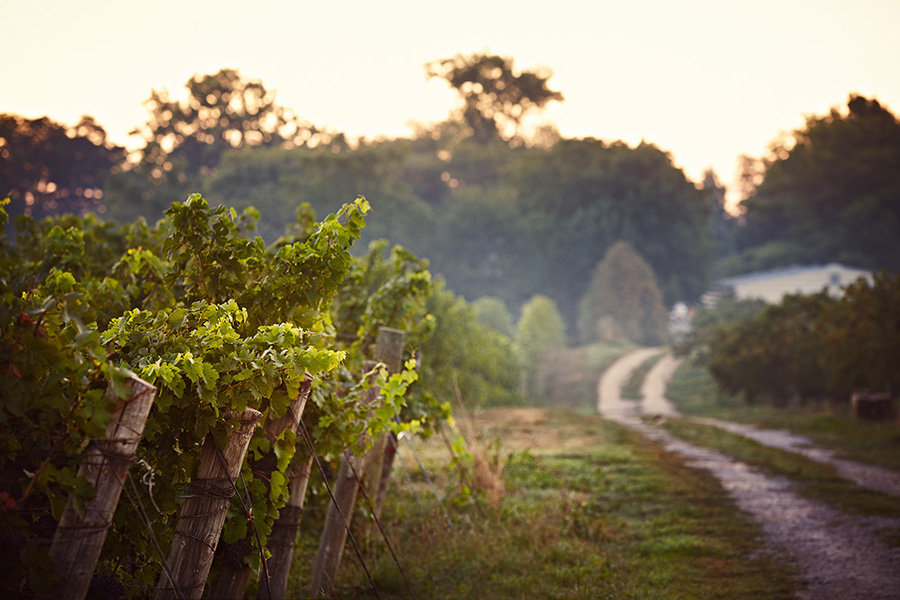 Terroir (French for soil) refers to the type and quality of soil, and more broadly to the microclimate and overall environmental conditions, of a vineyard or winemaking region. All these factors impart a unique flavour to the wine. Most soils in the grape-growing areas are composed of glacial till or sediments left in glacier-covered rivers and lakes, and clay-loam.

The terrain in Ontario varies from flat bogs and small tree forests of the north, to the more populated fertile lands of the south. Ontario extends below the 49th parallel more than any other part of Canada. The Ontario growing region lies between the 52º and 41º placing them in the middle of the northern grape growing belt (The same latitude as Bordeaux, France and the Northern wine regions of California). This region lies between Lake Ontario and Lake Erie to the East and Lake Huron to the West. The fertile soils and moderate climate combine to produce orchards and vineyards yielding fruits of unique character and supreme quality.

Niagara’s wine is usually made from one or more varieties of the European species , Vitis vinifera. Wine can also be made from other species or from hybrids, created by the genetic crossing of two species. Vitis labrusca, Vitis aestivalis, Vitis muscadinia, Vitis rupestris, Vitis rotundifolia and Vitis riparia are native North American grapes, usually grown for eating in fruit form or made into grape juice, jam, or jelly, but sometimes made into wine, e.g. Concord wine (Vitis labrusca species).

When one of these varieties is used as the sole grape the result is a varietal wine, as opposed to a blended wine which is made from more than one grape type. Blended wines are in no way inferior to varietal wines; some of the world’s most valued and expensive wines from the Bordeaux and Tuscany regions are a blend of several grape varieties of the same vintage. A number of these grape varieties are fermented alone to produce wines of a single variety or in combination. In each case, the wines will age in either French or American oak barrels between six months to several years before the winemaker decides that the wine is ready for bottling.

Why Ontario is Perfect for Growing Wine