Around Niagara Falls: The Historic Places 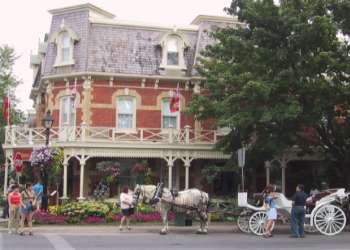 The Village of Queenston is located 12 miles north of Niagara Falls. There once stood the barracks housing detachments of Butler’s famous Rangers who, along with their Indian allies, raided deep into New York State during the Revolutionary War. Here, too, lived the wealthy Robert Hamilton, master of the portage, and later William Lyon Mackenzie, rebel and leader of the Patriot War in 1837, which was to be an important part of Canada’s rough road to federation. A restoration of Mackenzie’s house stands at the foot of the hill, and the amateur historian may wish to visit it and the relics that it shelters. In one wing Mackenzie printed his bitter, little sheet, The Colonial Advocate, which so stimulated and aroused his following among the poor.

Leaving the sleepy, little village of Queenston to dream of its past when the sailing vessels moored at the bottom of the portage and the hardy sailors sipped their flips and slings in her quaint taverns, we take the winding road along the River to the mother town of Upper Canada, once called Butlersburg, then Newark, then Niagara, and now Niagara-on-the-Lake. It, too, now lies dreaming about its romantic past as capital of the Province, battleground, and Rome for refugee French aristocrats and American slaves.

A short distance on the way to the little Mother Town from Queenston we come upon the marker for Vrooman’s Battery where old Solomon Vrooman, whose descendants still live near by, stood sweating and cursing with his artillerymen on the wet morning of October 13, 1812, his twenty-four-pounder hurling shot at the unfortunate men of Van Rensselaer’s army as they made their way across the River to join a fight that was to give so little credit to

American arms. Here, too, old U.S. General William Hull had passed in a stage only a few days before as Brock’s prisoner of war from the capture of Fort Detroit. General Van Rensselaer, sad-eyed on the opposite shore, had watched this long train of prisoners through his telescope. 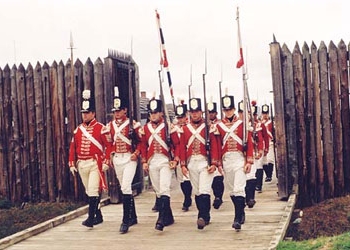 Farther down the road is Brown’s Point where a small group of militiamen stood in the cold rain of the early October morning as General Brook, riding by on his white charger to a rendezvous with Death at Queenston Heights, shouted, “Push on, Volunteers!” General Sheaffe’s regulars, on the double quick, passed here later the same day on their way from Fort George to turn the tide of battle at Queen ston.

Farther down we see what remains of the home of the refugee French count, Joseph de Puisaye, who came to this wilderness of the New World to escape the terror of the French Revolution. His farmstead was built in 1798.

Just below on the River’s edge is the tiny inlet where Colonel John Murray hid his boats for that fatal night raid of December 19, ‘1813, which took Fort Niagara from the Americans and resulted in the burning of Lewiston, Manchester (now Niagara Falls, New York), and Buffalo. It might be said that here started that tragic chain of events which was to bring about the burning of Washington, D. C., by the British under Major General Robert Ross.
Fort George

At the end of a sweeping curve in the road, the authentic restoration of Fort George comes to view, the guns of its embrasures frowning down upon us. The Fort was first built in 1796, when the British were forced to leave Fort Niagara, and it was here that Brock was in command. Surviving duels with its sturdier protagonist, Niagara, the last vestige of the old Fort was finally reduced to ashes by Brigadier General George McClure on December 10, 1813, the village of Niagara with it. For this rash act, McClure was stoned a few days later by his own countrymen on the streets of BuRalo, from which town he retired, disgraced, with the War Department’s reprimand ringing in his ears. Gentlemen did not bring their wars to innocent civilians! Had it not been for this mean business, the village beyond, with its ancient taverns, neo-classic brick homes, and quaint, little shops would be one of the most charming on the North American continent. However, save for Butler’s barracks, the powder magazine at Fort George, a part of St. Mark’s Church, and what is left of James Butler’s home on the outskirts of the town, not a building survived the torch of the American soldiers.

To miss a trip through the Fort, part of which is a museum, would be most unfortunate, for here we catch the spirit and the romance of the early Frontier. Tickets are purchased at the Trading Post, and guides recount the days of glory when the King’s men stood with pike, musket, and sword in the path of the invader.

Upon leaving Fort George, we take a short hillside path to Navy Hall, near the River, the last of a group of four buildings set up by the British sometime during the Revolution as a winter quarters and supply station for the crude, little provincial navy that sailed the Lake. Here Lieutenant Governor John Graves Simcoe once lived and held his parliament, for this ancient town was then the capital of Upper Canada. Here, too, during 1793, an act was passed that brought the gradual abolition of slavery on the King’s soil, an act that years later was to establish the Underground Railroad and haven for the escaped blacks who moved toward the evening star and freedom. During the 1830’s this quaint town was home to hundreds of negroes who had slipped across the River and the boundary. Strange, too, it was, that years later many of the aristocratic whites of the South sought refuge here during the Civil War.

In the summer of 1867 a tall, gaunt man with stooped shoulders and the wear of hard days on his face, mounted a platform on the village green and there delivered a speech during which he complimented the kind villagers for the asylum they had provided for his friends, among them former Senator J. W. Mason, so recently a traitor to his vow. Not a few of the blacks who still remained peered from behind trees at the tall man who had so nearly managed to keep their kinsfolk in bondage, for he was no other than Jefferson Davis, former president of the Southern Confederacy.

The Charm of St. Mark’s

Wandering on down through the village we come upon the ivy-covered St. Mark’s Church, citadel of history and of God. In its yard lie the bones of black, white, and red men; of soldiers, pioneers, French, English, and Americans. Built sometime between 1804 and 1809 to serve the Anglican parish that had been formed through the good offices of Colonel John Butler of Ranger fame, this quaint and charming edifice housed American soldiers during the 1813 occupation. Still visible on one of its stone grave-coverings are the gouges left by the army butchers for whom it served as a chopping-block.

Brock, among many other illustrious men now dead, worshiped at St. Mark’s. On Sundays during the summer months the good General often sat with the American officers who had rowed across the River from Fort Niagara to attend service. The last Sunday he worshiped he was seen to kiss the two little daughters of Fort Niagara’s surgeon, Dr. West. Turning to their father, Brock said prophetically, “This may be the last time I will see them.” War was in. the air on that quiet Sunday morning.
A villager will direct us to St. Andrew’s, built in 1831 and worthy of Christopher Wren at his best. The Scots, came early to the Frontier, put this beautiful pile together each brick hard bought with their honest toil. Shame on those Americans who set the torch to the first St. Andrew’s during the occupation of 1813! Perhaps we may partially atone for it by dropping a few spare coins into the box on the vestibule table.

At the Lake end of the village, we look upon toothless, old Fort Mississauga, hastily put together by the British army engineers during 1814, its bricks pulled from among the debris of the burned homes of the village. Yes, we may walk across the golf course and enter if we wish. Deep into the banks of the Lake run its magazine from which no powder ever came to fire a single hostile shot. Today this ancient pile is but a monument to over a hundred years of peace and understanding between neighboring peoples.

The End of  Fort George 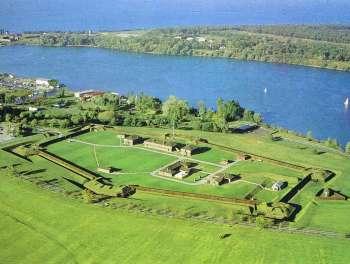 Fort George – Historic Fort George is a carefully restored military fort, which has a museum and is guarded by authentically dressed sentries.

Early on the morning of May 27, 1813, the Lake Ontario fleet under the command of the wily, conservative. Commodore Chauncey, opened fire on old Fort George, gouty old Major General Henry Dearborn, in charge of the land forces, crawling out of his bunk and standing on the deck of the frigate “Madison” with General Morgan Lewis to watch the guns belch their flame and grape. Lieutenant Oliver Hazard Perry and Lieutenant Colonel Winfield Scott, neither as yet in the glow of history, were in charge of the landing craft and the American regulars, now so anxious to avenge Queenston Heights.

For once during this silly and avoidable war, so much the handiwork of the “War Hawks” in the United States Congress, quick victory came to the American forces, the British managing to burn and blow up a large part of the Fort before their commander, General John Vincent, ordered the retreat to a point near Hamilton, Ontario. Here Vincent gathered strength and finally, during December of the same year, began the march back, when General McClure, uneasy if not frightened because of a sad lack of men and supplies, ordered the burning of the town before his army evacuated. A brilliant victory ended in dismal failure, even in shame.