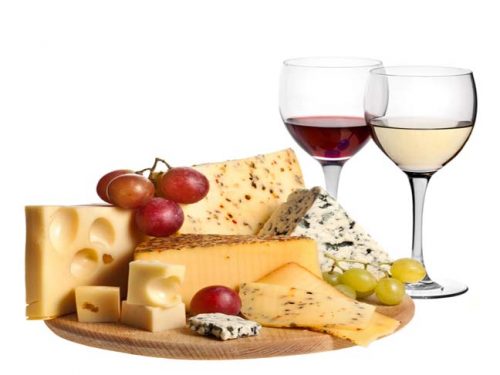 The custom of serving wine with cheese has been popular with peasants at least since the days of Homer. It became the rage among the smarter set only when King Louis XVI of France stopped for refreshments at Varenne where he enjoyed a fresh Brie cheese taken together with bread, butter and a dry red wine. From that day until the present, there have been few treats more sophisticated than the combination of wine and cheese.

Which wine goes best with which cheese is very much a question of personal taste. The truth is that there are so many wines and so many cheeses that it would take an encyclopedia to list and pair them all together. Wine is often at its best with cheese but not all wines go with all cheeses. Just as with other foods, certain cheeses are best suited to certain wines. Red wines, for example, are generally considered best with most cheeses, but whites go especially well with goats’ milk cheese and cooked cheese dishes.

The following table may prove useful in selecting the proper wines for the proper cheeses. The list is based on a combination of my own experiences, the writings of English wine critic Hugh Johnson, French restaurant critic Robert Courtine and American gastronome and food writer Craig Clairborne .

When NOT to serve cheese and wine together

The only time when wine should not be accompanied by cheese is at a wine tasting. Because cheese smoothens the rough taste of certain wines, especially rough reds, the cheese tends to over-emphasize the value of the wine and gives a false impression of its true quality. I often receive invitations to taste wines at wineries. I always smile inwardly when there is cheese placed on the table at such tastings for it may mean that the winery is trying to hide a

The correct pairing of Cheese and Wine

Wine Food Pairing What Works Best for Your Meal