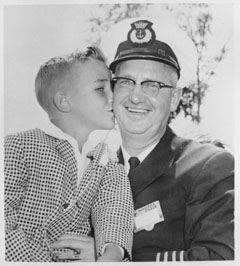 Roger Woodward gives a sign of appreciation to the captain of the Maid of the Mist for his rescue from the Niagara River after his miraculous trip over the falls.

On a warm July afternoon in 1960 Jim Honeycutt, from Niagara Falls, New York took two young friends for a boat ride in the upper Niagara River. The boat quickly developed engine problems, and capsized, throwing the three passengers into the river upstream from the falls. Jim Honeycutt was quickly swept over the edge to his death, but the two remaining passengers, a young brother and sister, had luck on their side that day.

Roger Woodward was just seven years old on that fateful day in 1960. Clad only in a bathing suit and life jacket Roger was also swept over the falls but unlike his friend he would live to tell the tale and be the first person ever to make the plunge clad only with a life preserver and live to talk about it.

As Roger was cascading over the falls another drama was unfolding on the bank of the Niagara River just twenty feet above the brink.

Like her brother, Deanna Woodward too was being swept closer and closer to an almost certain death. Hundreds of spectators stood in horror, watching helplessly as the seventeen year old girl struggled valiantly in the waves.

Two spectators watching the tragedy unfolding risked their own lives to rescue the young girl. John R. Haynes, a truck driver from New Jersey jumped into action climbing over the rail and extending an arm for the girl to latch on to. 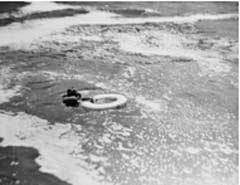 Roger Woodward being rescued by the Maid of the Mist

Realizing the young woman was nearing exhaustion he encouraged her to kick with all her might. Deanne Woodward would later recall how this mans’ encouraging words likely saved her from death that day.

Deanne Woodward was able to clasp on to her rescuers finger, but fearing her grip would not hold he yelled for help from the crowd. Another New Jersey native, John Quattrochi helped to pull the girl from the raging river just feet from an almost certain death.

As Deanna was being pulled from the river and later taken to hospital, her brother, surviving his trip over the falls was bobbing like an apple in the turbulent water below the falls. 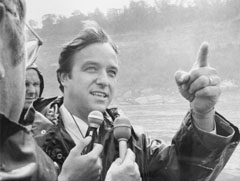 Roger Woodward would return to Niagara Falls on the 30th anniversary of his miraculous journey over the falls.

Luckily for him, at that very moment the Maid of the Mist was just making its turn below the falls when the captain spotted the bright orange life jacket. After several attempts at throwing the boy a rope he was safely lifted on board.

In 1990 on the thirtieth anniversary of the incident Roger and his sister Deanna made a return trip to Niagara Falls.

Roger, then 37 spoke to a hushed audience about his ordeal some thirty years earlier. He spoke of that day as if it had only happened yesterday, the events of that day imprinted forever on his young mind.